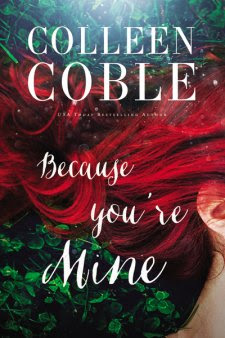 Salutations!  Angie Fox's latest The Southern Ghost Hunter Mysteries comes out January 26.  It is titled Dog Gone Ghost (book 4.5 in the series).  It will be available for purchase on Amazon on that date.  It is a cute and humorous story.  Now is the perfect time to see if this series is for you.  The first book, Southern Spirits, is currently free on Amazon (for a limited time).

Because You’re Mine is the latest novel by Colleen Coble.  Alanna Connolly is a singer and fiddle player in the band Ceol.  Alanna created the Celtic band that includes Fiona, Ciara, Ena.  Alanna’s husband, Liam plays percussion instruments for Ceol.  After a performance in Charleston, Liam is going out with his friend, Jesse Hawthorne.  The pair went to college together in Ireland.  Liam leaves with Jesse and Alanna heads out in the van with her bandmates.  They get down the street when there is an explosion.  Jesse’s yellow sports car is in flames.  Only one of the men survived the explosion.  The paramedics ask the survivor his name and they are told Jesse.  Alanna is devastated at the loss of her husband especially since she is four months pregnant with their first child.  Upon returning to Ireland for the funeral, Liam’s father, Thomas threatens to sue for custody of Alanna’s baby (their last link to their son). Alanna will not let them get her son and asks Barry Kavanagh, lawyer and band manager, for assistance.  Alanna wishes to become a citizen of the United States.  Barry tells her the fastest way to accomplish it is to marry and he proposes.  Barry is from an old southern family in Charleston, and he will be able to keep the child (and Alanna) safe.  Alanna quickly agrees and they marry eight weeks after Liam’s funeral.  After the wedding, Barry takes Alanna to his old family home twenty miles from Charleston.  The big house is positioned near a swamp that is home to a gator named Pete.  The home is in desperate need of repairs.  It turns out that Barry neglected to mention a few things to Alanna.  The crumbling Kavanagh home is full of secrets and danger.  To make things worse, Jesse keeps popping up in Alanna’s life.  Jesse has memory of life before the accident and he does not like what he has discovered.  He wants to make changes.  Join Alanna, Jesse, and Barry in Because You’re Mine.

Because You’re Mine is nicely written and easy to read.  I found the storyline to be predictable.  I could tell how the book would end before Alanna married Barry (I forecasted every “twist”).  I found several things odd and just plain unbelievable.  Alanna likes to walk around without her shoes on.  Would you walk near a swamp without shoes on?  Especially since there are snakes and gators hanging around!  I can understand wanting to protect her unborn child, but rushing into marriage with a man you barely know.  Alanna also fails to research citizenship requirements or custody laws for herself (would you trust an American attorney on Irish law).  I give Because You’re Mine 2 out of 5 stars.  I thought Alanna to be very naïve and gullible for someone who is about to turn thirty.  I was disappointed in the books ending.  The author did not wrap up all the threads with the epilogue.  I felt Because You’re Mine an expected love story, and it reminded me of those chick flicks that I do not watch on Lifetime.

Thank you for visiting.  I hope all of you have a good evening. Take care and Happy Reading!