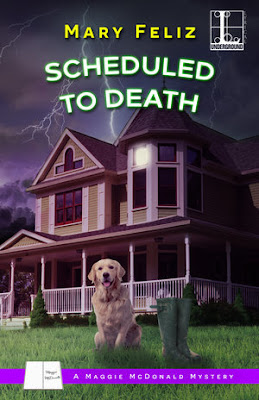 Happy Book Release Day!  Time Out by Suzanne Trauth, Scheduled to Death by Mary Feliz, and Phantom Limb by Lucinda Berry (I will be reviewing soon) are the books that came out today.


Scheduled to Death by Mary Feliz is the second book in A Maggie McDonald Mystery series.  Maggie McDonald is a professional organizer.  After recently moving to Orchard View with her husband and two kids, Maggie started Simplicity Itself Organizing Services.  Her latest client is the very absentminded Professor Lincoln Sinclair, who is marrying local school librarian, Sarah Palmer.  Maggie has an early appointment with Linc to finish the decluttering process.  Tess Olmos, Linc’s realtor, has tagged along to check the progress Maggie has made.  Tess is using Linc’s home for her annual holiday home showcase.  Linc arrives late after working all night in his university laboratory on a new idea.  They head upstairs to look at Linc’s workroom which is the last room to be completed in the house.  The three of them head upstairs and are shocked to find Sarah on the floor.  She is laying in a pool of water with her hand clutching a frayed electrical cord. They contact 911 and await the police.  Unfortunately, Detective Jason Mueller is out of commission with a broken leg, and Acting Detective Lt. Gordon Apfel is in charge of the investigation.  The detective is quick to point the finger at Linc (he is not known for his work ethic or intelligence).  Maggie will not let this man railroad the professor.  Join Maggie in her search for Sarah’s killer in Scheduled to Death.

Scheduled to Death is easy to read and can easily be a stand-alone book.  The author provides the needed background information on the main characters and a summary of what happened in Address to Die For.  The mystery was intriguing, but most readers will be able to identify the culprit long before the reveal.  I give Scheduled to Death 3.5 out of 5 stars.  I have to admit that I did not enjoy Scheduled to Death as much as Address to Die For (first book in series).  I was not fond of the addition of Acting Detective Lt. Gordon Apfel.  I found him to be rude and inept as well as distracting to the storyline.  Maggie was a little manic in this book.  She was constantly running around doing tasks, helping others, or making meals (she was always over scheduling herself).  I believe that A Maggie McDonald Mystery series has potential.  With a little tweaking, it can be a very good cozy mystery series.  The first book in A Maggie McDonald Mystery series is Address to Die For. Dead Storage is the third book in the series and will be released in July.