The Lost Girl of Astor Street 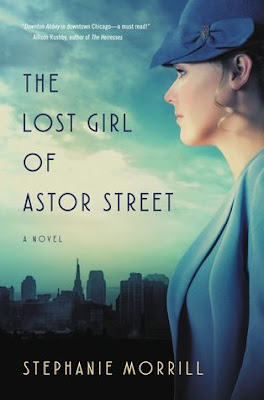 Hello!  I hope everyone has had a good Wednesday.  I spent the day doing housework and giving my youngest dog, Doozy a bath. Doozy tried very hard to avoid the bathtub (even hiding under my mother's bed), but, in the end, I won the battle.  He now smells like strawberries (one scent I am not allergic to) which will probably only last one day!  I will be bathing the other two dogs (Wolfie and Tuxxe) this week as well.  The smallest dog, Tuxxe is the hardest one to get into the tub.  He is a chihuahua (need I say more).

The Lost Girl of Astor Street by Stephanie Morrill is set in Chicago, Illinois in 1924.  Piper Caroline Sail is eighteen years old and best friends with Lydia.  Lydia has been having seizures (epilepsy), but her parents (especially her doctor father) have been telling her they are fainting spells.  Piper has been forbidden from telling Lydia the truth (by Lydia’s parents).  Late one afternoon Lydia stops by to tell Piper that her parents are sending her away to the Mayo Clinic in Minnesota.  Lydia does not wish to leave because she is in love with their chauffer, Matthew.  Lydia takes leave of Piper and heads down the street to the Barrow’s.  The next day Piper is approached outside Presley’s School for Girls by two detectives.  Lydia never returned home the previous evening and has been reported missing.  Piper is very worried about her best friend and will do whatever it takes to find her.  Piper finds that she has been leading a sheltered life on Astor Street.  With the help of Detective Mariano Cassano and Walter Thatcher (the housekeeper’s son and friend), Piper starts asking questions and following up on leads.  Piper will not stop until she finds out what happened to Lydia even if it means risking her life.

I am off to put clean sheets on my bed and then relax for the night. I am currently reading Raging Storm by Vannetta Chapman (it was released early).   Tomorrow I will be reviewing Little Girl Lost by Carol Wyer.  May you have a delightful night.  Take care and Happy Reading!