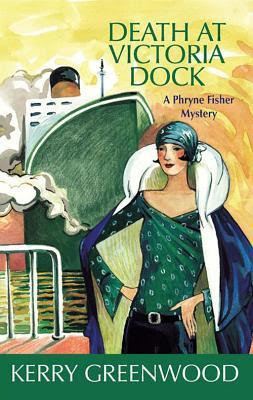 I hope everyone has had an enjoyable Saturday.  A cold front blew in overnight in my area (hooray). It is only in the 50s today (which is cold for our area).  Of course, my car battery decided to give up the ghost, and I had to wait for roadside assistance to show up.  By the time I arrived somewhere to get a new battery installed, I was told it was too late in the day.  I was able to purchase a battery, and I will now spend the evening watching videos on how to install one.  Wish me luck!

Death at Victoria Dock by Kerry Greenwood is the fourth A Phryne Fisher Mystery.  It is 1928 in Melbourne, Australia.  The Honorable Phryne Fisher is driving home late one night when her windshield is shot out.  Someone is shooting at her.  Phryne sees two men fleeing and another man on the ground.  She quickly stops the car and runs to his aid.  The man whispers a few words to Phryne before succumbing to his wounds.  The young man was only seventeen years old and did not deserve to die.  Phryne promises to find the men who killed him.  This pledge will lead Phryne to anarchists, a socialist bookshop, a tattoo parlor (where Phryne shocks the men within), a “spiritualist”, and Peter Smith (if you know Phryne, I bet you can guess where Peter will end up).  But what happens when the anarchists take Dot Williams, Phryne’s companion?  Phryne must split her time between finding the young man’s killer and her latest case.  Mr. Waddington-Forsythe’s fourteen-year-old daughter, Alicia has been missing for three days.  He would like Phryne to locate her quickly and discreetly.  According to Phryne’s two adoptive daughters, Alicia was not well liked at The Presbyterian Ladies College.  Alicia collected secrets which she then entered into her purple leather diary.  Did Alicia threaten to spill someone’s secret?  Phryne will need all her investigating abilities and the help of her friends to solve these two cases.

Death at Victoria Dock is a well-written and engaging mystery novel.  I love the character of Phryne Fisher.  Phryne is an intelligent, vibrant and witty woman (she is full of life).  Phryne is a woman who does not let anything stand in her way (I admire her).  The novel has just the right amount of humor and romance.  I give Death at Victoria Dock 4.25 out of 5 stars.  The novel is a quick and easy read.  The book has a good pace (except in a couple of spots) and two good mysteries (one is more complex than the other).  Death at Victoria Dock can be read as a stand-alone book.  All the information a reader needs is provided within Death at Victoria Dock.  You might, though, upon completion find yourself hunting out the other novels in A Phryne Fisher Mystery series.  I do wish that Detective Inspector Jack Robinson had been included in this story.  I will definitely be reading more books in A Phryne Fisher Mystery series.  There are twenty books in A Phryne Fisher Mystery series.  The series starts with Cocaine Blues and ends with Murder and Mendelssohn.  If you have not tried Miss Fisher's Murder Mysteries on PBS, I highly suggest you give the show a try. It is usually on Fridays at 9 p.m. on a secondary PBS channel.

I am going to go watch videos on how to change a car battery (the car repairman suggested it).  I then need to start She Stopped for Death by Elizabeth Kane Buzzelli.  I sincerely wish that all of you have a lovely evening. Please be careful if you are out driving (many states are getting snow).  Take care, stay warm and Happy Reading!


Posted by Kris Anderson, The Avid Reader at 7:54 PM