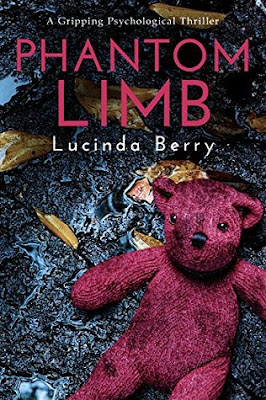 I hope all of you have had a delightful Wednesday.  I spent the day doing housework and a little yard work.  I was down with my headache trifecta yesterday (I suffer from three types of headaches), so I had extra work to do today.  After all the wind we had this past weekend, I had several trash cans of limbs.  I am still working at raking up the leaves.  When I purchased this house, I thought the trees would be helpful in keeping the house cool.  I did not take into account the work involved in raking and picking up fallen leaves.

Phantom Limb by Lucinda Berry is the story of Elizabeth and Emily Rooth.  Emily and Elizabeth are twenty years old and identical twins.  They had an extremely difficult childhood with an abusive (cruel, depraved) mother.  The twins were lucky enough to be adopted when they are eight by Dalila and Bob Rooth (they are patient and loving people).  After graduating from high school, the pair moved into their own apartment.  Elizabeth is attending a local college on scholarship and works as a telemarketer (because of the flexible hours).  Elizabeth is also dating Thomas (a seminary student), but she has yet to work up the nerve to tell Emily.  Emily has had a difficult time since they moved into the apartment.  Emily suffers from severe depression and is a cutter.  Some days she cannot get out of bed.  Elizabeth devotes herself to taking care of Emily.  One day Elizabeth finally tells Emily about Thomas.  Emily does not take the news well and refuses to let him in the apartment.  A couple of days later Thomas tells Elizabeth that Emily confronted him one day outside work (Emily was not nice).  That evening the two of them have a fight.  Emily goes into the bedroom and slams the door.  Elizabeth can hear her crying, but refuses to comfort her this time.  The next morning Elizabeth goes to check on Emily and finds her dead in the bathroom.  A week later Elizabeth wakes up in the hospital.  Elizabeth is put in the psych ward with a team of professionals to help her.  They slowly help her discover what happened and how she ended up in the hospital.  Elizabeth is in for some startling revelations.

Phantom Limb is listed as a psychological thriller, but it does not read that way.  I did not even find it mysterious or suspenseful. Phantom Limb has a decent pace except for the areas about various psychological conditions (technical talk).    I give Phantom Limb 3 out of 5 stars.  Phantom Limb is more the telling of a horrific story.  The two “twists” were easy to predict.  I wrote down what I thought would be the revelations and then read the book to see if I was right (I was).  I was hoping to be stumped or shocked (it is supposed to be psychological thriller).  I found the ending to be expected.  Phantom Limb does contain violence, child abuse, and upchucking (be careful not to eat while reading).  Phantom Limb shows a good example of a person who should not have children (and the damage the wrong parent can inflict on children). Phantom Limb is available on Kindle Unlimited (great program on Amazon).

I will be reviewing Dog Gone Ghost by Angie Fox tomorrow.  I am going to enjoy my dinner and then watch my shows (Arrow, Frequency, and Code Black).  I am reading Murder Wears White by Stephanie Blackmoore.  May all of you have a enchanting evening. Take care and Happy Reading!