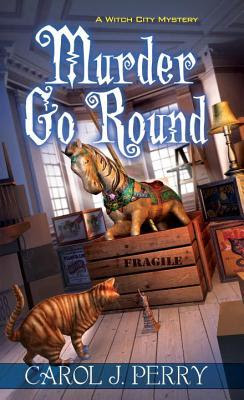 How is everyone today?  I am, thankfully, much better today.  I do not like it when I am so sick I do not even want to read (for me that is very, very sick).  Cold weather has hit Florida.  You can tell when it is cold for Floridians because we actually wear jeans, sneakers, and a light jacket (no short, sandals or flip flops).  My oldest dog, Wolfie, just loves the cooler weather.  She is a Siberian Husky!

Murder Go Round by Carol J. Perry is the fourth book in A Witch City Mystery series.  It is late August in Salem, Massachusetts.  Maralee “Lee” Barrett and her aunt, Ibby (Isobel Russell) are going to a storage locker auction.  The first locker looks like it is full of junk, but Ibby notices the writing on one of the boxes.  They bid and win.  What looks like a space full of junk, turns out to be full of treasures.  There is a beautiful hand-carved wood carousel horse wrapped in a crazy quilt, a gorgeous clock, Russian nesting dolls, and a gorgeous sterling silver samovar.  But it seems that someone else wants their newly acquired gems.  They sort through the many items and divide them into piles.  One pile heads to the curb, one for the local charity shop, and the final (and much smaller) pile heads into the house.  Pete Mondello, a police detective and Lee’s boyfriend, helps Lee take the carousel horse to Paul Carbone be refinished.  That night Lee receives a call from Pete that Paul’s shop has been broken into.  Someone took apart her carousel horse and the police found a man deceased outside Paul’s shop.  It is soon obvious that the culprit is not finished.  The next morning, they discover that the trash from the storage locker has disappeared from the curb during the night (trash men are not that efficient).  The items at the thrift shop are also gone. What could they be looking for?  Lee uses her special ability (she can see visions in reflective surfaces) along with clues from her equally unique cat, O’Ryan to help Pete solve the case.

Murder Go Round is easy to read, and I like the setting of Salem, Massachusetts.  While Murder Go Round is the fourth book in A Witch City Mystery series, it can easily be read alone.  The author updates the reader on what has occurred in the previous novels.  The mystery is intriguing.  I like how it takes us back to Czar Nicholas II (the last Czar of Russia before the revolution).  I give Murder Go Round 3 out of 5 stars.  I did not enjoy Murder Go Round as much as I did the previous books in the series.  I found information to be repeated (especially about the case) and the mystery was not difficult to solve.  I was able to ferret out the culprit early in the book.  I wish there had been less time spent on Raven and her tarot card reading.  I did not feel it enhanced the story (it was distracting and the cards are confusing).  I wish that Lee would embrace her abilities.  I am tired of her complaining about her unique gift.  Lee mentions more than once that she associates her gift (visions) with death and dying (what does she expect when she solves mysteries and helps her detective boyfriend).  I believe the author needs move Lee forward.  We need to see her character grow, develop and embrace her gift.  I will read the next book in A Witch City Mystery series.  I will give it another shot to see if there is improvement.  Murder Go Round will be released on Tuesday, January 31.

The other novels in A Witch City Mystery series are Caught Dead Handed, Tails You Lose, and Look Both Ways.  Thank you for visiting. I am currently reading Unpunished by Lisa Black.  May all of you have a special evening.  Take care and Happy Reading!


Posted by Kris Anderson, The Avid Reader at 8:05 PM