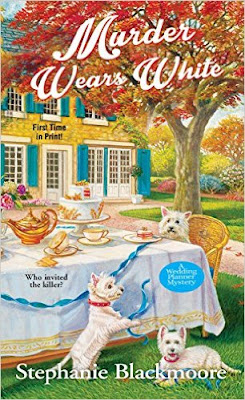 Happy Monday!  I spent the day doing various chores around the house and yard today.  It was such a nice, peaceful day (I get so few of these).

Murder Wears White by Stephanie Blackmoore is the second book A Wedding Planner Mystery series.  Mallory Shephard is having Thistle Park, the home she inherited from Sylvia Pierce, renovated.  She is turning it into a bed and breakfast as well as a wedding venue (Mallory is also launching a wedding planning business).  Then Whitney Scanlon throws a wrench in the works.  She wishes to move her wedding from June to November 1 (in just four weeks).  Whitney’s father, Porter is ill and his last wish is to walk Whitney down the aisle.  Mallory, of course, agrees without consulting with her contractor, Jesse Flowers.   It turns out that there have been “accidents” on the site.  After Rachel, Mallory’s sister, almost falls through a newly installed railing, it is suggested that the house is haunted.  Rachel (without Mallory’s permission) agrees to have The Port Quincy Paranormal Society check out the house.  Whitney is attending a tasting with Porter, and her two aunts, Lois and Angela (along with Lois’ three Westies).  Afterward, Lois starts choking and collapses.  Lois dies before the paramedics can arrive.  Who wanted Lois dead? Whitney’s mother was murdered twenty years prior.  The man convicted of the crime claims he is innocent and Whitney has been receiving anonymous letters regarding Eugene Newton, the convicted man.  Is there a connection between the deaths of Vanessa and Lois Scanlon?  Mallory wants to resolve these issues for Whitney before her wedding. Someone, though, sets out to sabotage her efforts.  It is going to be a busy four weeks for Mallory.  Will Whitney be able to get married on November 1?

Murder Wears White is a very busy novel.  I only summarized the main events.  It seems there is one zany thing after another (and I was not laughing).  Murder Wears White is easy to read and can be finished in just a few hours.  While it is the second book A Wedding Planner Mystery series, it can be read as a stand-alone.  The contents of the first book (Engaged in Death) are summarized in Murder Wears White.  I give Murder Wears White 3 out of 5 stars.  The murders of Lois and Vanessa were complex, but easily solved.  I knew exactly what killed Lois before she started choking.  I could tell you the culprits identity by the time I was 40% of the way through the novel.  The secondary riddle of the mysterious ghost and the work-related accidents is no brain teaser.  One conversation gave away the identity of the perpetrator.  I wish this author had not packed such much nuttiness into Murder Wears White.  I especially detested Delilah Flowers, Jesse’s obnoxious mother.  She is a tarot reading, scooter riding terror that comes to work with Jesse.  She drives her scooter around Thistle Park terrorizing the workers and Mallory.  Why would anyone hire Jesse if he insists on bringing Delilah with him?  Rachel Shephard continually steals her sister’s clothes and jewelry without returning them.  She is also a big flirt who dates any handsome man with a heartbeat (or so it seems).  Lois and her three dogs that she takes with her including to a stranger’s home for a wedding tasting.  Do you see what I mean (and there is still more)?  One of these things would be funny, but several of them has me just shaking my head. I just felt that all this detracted from the novel.  I wish the author had focused on the main mystery.  It was enough for this book along with the wedding and house renovations.  I believe it would have made for a more enjoyable novel.  Murder Wears White releases on Tuesday, January 31.

The first book in A Wedding Planner Mystery series is Engaged in Death and it is currently $1.99 on Amazon.  I am off to relax for the night (some great shows on tonight).  I am currently reading A Death at the Yoga Cafe by Michelle Kelly.  May all of you have a peaceful evening.  I will return tomorrow.  Take care and Happy Reading!