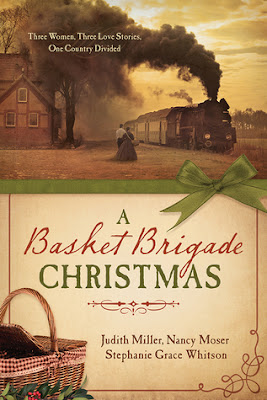 I was awakened at 5 a.m. this morning (I had been asleep about an hour and a half) by the sound of cats fighting and it was not inside the house! I looked out my window and there were two cats fighting.  Poor things.  I hurried outside, and they both took off.  I hope none of them were hurt.  I was not able to find them to see if they were injured.

A Basket Brigade Christmas by Judith Miller, Nancy Moser, and Stephanie Grace Whitson is a Christian Romance Novel.  It is three stories that take place from September 1862 through December 1862 in Decatur, Illinois.  A train comes through the town every day with wounded soldiers heading for the hospital in Chicago.  The ladies of the town got together and arranged to feed the soldiers on the train.

A Stitch in Time by Stephanie Grace Whitson is the first book.  Lucy Maddox has been living alone since the death of her parents three years previously.  She upset to learn that her crush Jonah Kincaid (he only thought of her as a friend) just died.  Lucy has decided to she wants to do something more for the war effort.  She has decided to open up her home (something her father never would have tolerated when he was alive) and set up a work place.  She wants the women to create blankets and knit socks for the soldiers.  Lucy had noticed how threadbare their blankets were and the soldiers mentioned how much they needed warm socks.  Lucy will provide many materials from Maddox Mercantile that she inherited from her parents.  The mercantile is currently run by Silas Tait who is injured (lost lower left leg) and cannot fight in the war.  Silas is in love with Lucy, but he does not think she will consider him (because he works for her and his injury).  Then Private Oscar Green enters the picture.  Is Private Greene the good person he is presenting to Lucy?  Silas will not let anyone hurt Lucy.  Will Silas tell Lucy how he feels before it is too late?

A Pinch of Love by Judith Miller is set in October of 1862.  Sarah McHenry helps in her family’s bakery which also supplies items for the Basket Brigade.  Sarah has refused to take part in the endeavor because of her twin brother, Samuel who is at war.  When Sarah’s mother becomes ill, Sarah is forced to take over her duties (Sarah’s mother is actually in charge of the whole affair).  Sarah meets Corporal Jacob Curtis who is an aide on the train.  However, Jacob would rather be in battle.  Can Jacob see how important his job is on the train?  Matthew Slade works at the Depot Hotel and Restaurant.  He has been trying to court Sarah for years (and she keeps refusing).  Matthew sees Sarah working with the Basket Brigade as a chance to change her position on courting.  Will Matthew succeed in his pursuits or has someone else worked their way into Sarah’s heart?

Endless Melody by Nancy Moser is the most religious of the three stories.  Zona Evans is the director of the Christmas musicale.  When she was younger she was very selfish and strong willed (still is stubborn).  She was engaged to Cardiff Kensington.  Cardiff went off the fight in the Mexican war and never returned.  Zona never heard from him again.  Cardiff is now a doctor in St. Louis.  He has not forgotten Zona, but does not understand why she never answered any of his letters.  Zona has never married nor is interested in anyone else.  Cardiff transfers to Chicago to work in the military hospital.   Zona has decided to take a few members of the musicale and have them sing Christmas carols to the injured soldiers on the train when it stops.  Will Cardiff and Zona ever meet again?

I enjoyed the three stories, but did not love them.  They are your typical Christian romance stories.  There are some nice messages in each story like putting your ambitions or what you want ahead of what God wants for you.  Another is that there are consequences for your actions.  I did like how all three stories tied together with the same town, time period, and the Basket Brigade.  It was very interesting learning about the Basket Brigade and what people did to help the soldiers.  I give A Basket Brigade Christmas 3.5 out of 5 stars.

I received a complimentary copy of A Basket Brigade Christmas from NetGalley in exchange for an honest review.  The review and opinions expressed are my won.

I am off to feed the cats and dogs their dinner (and push more food at my father).  I am determined to get my father better!  It will just take time and patience (which I do not possess according to my family).  Happy Reading!