The Poet and the Prophecy 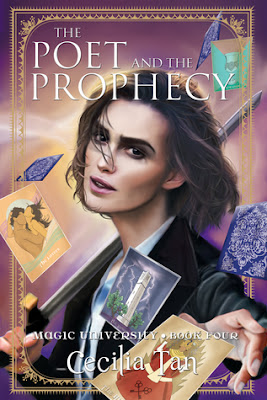 My wasp problem is getting smaller!  I am glad that I bought two different sprays.  The first one (with the non-conducting electricity) got rid of 80% of the wasps.  I have waited two days and now I have sprayed again (with the second spray).  The second spray is supposed to work over several days to get the stragglers.  Keep your fingers crossed that they go away permanently!


The Poet and the Prophecy by Cecilia Tan is the fourth book in the Magical University series.  This book is an erotic novel with a magical theme (the cover makes it look like a young adult or children’s book).  Kyle Wadsworth is entering his senior year at Veritas (next to Harvard).  It is a college for magical students.  Kyle has been asked to move back into Gladius House (like a dorm), and that Timothy Frost will be moving back in as well (Kyle is in love with him).  Kyle cannot forget Frost, but Frost wants Kyle to keep his distance.  Frost is a man during the day and a girl at night (Frost thinks it is a curse and dislikes his female form).  Kyle broke the enchantment that kept Frost a man full-time and no one has been able to fix it.  Kyle wants to try fixing the problem for Frost (and hoping it will mend their relationship).

There are some big problems in the magical world.  People are losing their abilities (the Sight) and people are saying that the Burning Days (the end of magic) are coming.  Kyle and his friends work to find a solution.  Can they fix the problem in time?  Will Timothy Frost ever let Kyle get close to him?

I find Timothy Frost to be a very weak character.  I got very tired of him pushing Kyle away and the whining.  He was dealt his lot (and he has suffered a lot in his short life), but he has to find a way to live with being two genders.  The Poet and the Prophecy got much better in the second half of the book.  It is not as good as the first book in the series, but much better than The Tower and the Tears (Book Two) and The Incubus and the Angel (Book Three).  The book does have a good ending and a nice epilogue.  I give The Poet and the Prophecy 3.75 out of 5 stars.  I think the author made the magic a little too complicated (I started skimming through the technical talk after a while).  I also do not think this series lived up to its potential.  The first book was very good and interesting, but the rest of the series just to live up to that first novel, The Siren and the Sword.  Please be aware that the novel does contain foul language and explicit sex scenes.  You do have to read the other book in the series in order to understand what is going on in The Poet and the Prophecy (otherwise you will be lost).

I received a complimentary copy of The Poet and the Prophecy from NetGalley in exchange for an honest review.

Tonight is the beginning of season three for Miss Fisher's Murder Mysteries.  It is a wonderful show.  It is set in 1920's Australia with a great female detective.  If you are interested, check your local PBS stations. I hope everyone has a great weekend and Happy Reading!