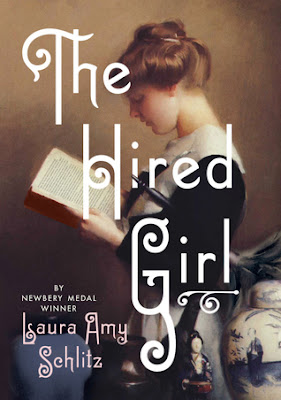 My mother is actually cleaning (Yes, I do call her mother)!  I think it is a miracle!  I have not seen her clean a room in about ten years (I am not joking).  Of course, she has been cleaning the same area for the last hour. Now she has stopped to check out some books on a shelf (I inherited my love of books from my mother).  I do not think this room will get finished today, but I am very grateful for the help!

I just finished The Hired Girl by Laura Amy Schiltz.  It is a children’s book that is written in the style of a journal/diary.  Joan Skraggs is fourteen years old in 1911.  She lives on Steeple Hill Farm with her father and three brothers.  Her mother passed away about four years previously.  Joan’s father has decided that she cannot continue with school (and that she does not need it to keep house).  As a going away gift her teacher, Miss Chandler gives her a blank book to write in.  Joan is actually quite intelligent and learns quickly (but she is very naïve in the ways of the world).  Joan’s father does not allow her any money, not even the egg money.  Joan decides to go on strike.  Her father retaliates by burning her three books (classics she received from Miss Chandler).  Joan has decided she cannot take it on the farm any longer and plans to run away.  Her mother had given her a doll (named Belinda) with money sewn into her apron.  Joan’s mother told her it was for an emergency (I think she knew that Joan would need to get away at some point).

Joan escapes and heads to Baltimore.  After a scary incident, Joan is rescued by Solomon Rosenbach.  Solomon takes Joan home to his parents’ house.  Joan tells Mrs. Rosenbach that she is eighteen and her name is Janet Lovelace.  She is hired as a maid to assist their elderly housekeeper, Malka (very set in her ways).  The Rosenbach’s are Jewish and Joan has to learn about Orthodox Jews (two sinks, two refrigerators, two sets of dishes, etc.).  Joan proceeds to write about her new life in the Rosenbach household.  Learning about fashion (from the Rosenbach’s youngest daughter, handling money, seeing the opera, access to the families library (she loves to read), being careful with candles (she sets her hair on fire), and about religion.  Joan was raised by a Catholic mother and she wishes to be baptized into the church.  Joan is young (emotionally immature) and naïve so she is going to make mistakes.  Joan’s ultimate goal is to be a schoolteacher.  Will she be able to achieve her goal?

I found The Hired Girl to be an interesting book.  The writer did a very good job writing it as though a fourteen year old girl was actually writing about her life.  It is very easy to read and there are many laughs in the book.  I think young girls (between nine and thirteen) will enjoy reading The Hired Girl.  It provides a glimpse into the life of a maid in a Jewish household in 1911.  I give The Hired Girl 4 out of 5 stars.

I received a complimentary copy of The Hired Girl from NetGalley in exchange for an honest review.  The review and opinions expressed are my own.

I am currently reading The Mistress of Tall Acres by Laura Frantz. It is an enjoyable book (I will post my review tomorrow).  I am off to run some errands.  Have a lovely afternoon and Happy Reading!