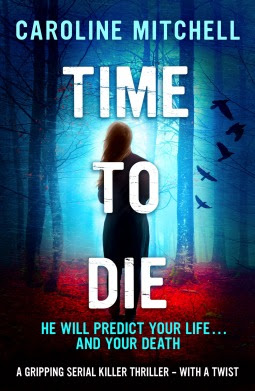 It is National Cherries Jubilee Day!  Who makes these things up?   Doozy was in a hippy hoppy mood!  He does these jumps like a jackrabbit!  Ever have a 60 plus pound dog jump around on your bed like a rabbit?  I feared for my bones!

I just finished Time to Die by Caroline Mitchell.  It is the second book in the Jennifer Knight Crime Thriller series.  DC Jennifer Knight works in Operation Moonlight.  A special division that deals in the supernatural (the unit members also have special skills).  Jennifer and her partner, DC Will Dunston have been called out to a scene.  A man is dead just after a stranger read his fortune using tarot cards (and predicted his death).  Did the tarot reader have something to do with the man’s death?  Then another person is dead and again the tarot reader was mentioned.  Who is this man?

The tarot reader is only known as The Raven.  He reads your fortune (past, present, and future) and it will come true.  Is he really predicting the future or is he helping it along?  Does The Raven have anything to do with the cult The Reborners?  The Reborners is for people looking for a second chance at life.  They also encourage crime (shoplifting, dealing drugs).  Is The Raven the leader of the cult?  Jennifer Knight is being targeted by The Raven.  He is sending her notes with a black raven’s feather enclosed.  The notes help provide her with psychic clues.  Jennifer is going to have to work hard to catch The Raven.  Will she catch him in time to prevent the death of someone close to her?

I enjoyed reading Time to Die.  It has a great twist at the end (if you follow the clues you will be able to figure out).  I enjoyed the supernatural element in the book along with the mystery.  There is also a little romance.  It is well-written and keeps the reader’s attention.  There is also a part with raven’s that is creepy!  I give Time to Die 4.25 out of 5 stars.  I look forward to reading Caroline Mitchell’s next book.  The first book in the series is Don't Turn Around.  Time to Die was released today!

I received a complimentary copy of Time to Die from NetGalley in exchange for an honest review.

I am currently reading The Bishop's Son by Kelly Irvin.  I am off to run some errands.  Have a great afternoon and Happy Reading!

Posted by Kris Anderson, The Avid Reader at 2:01 PM