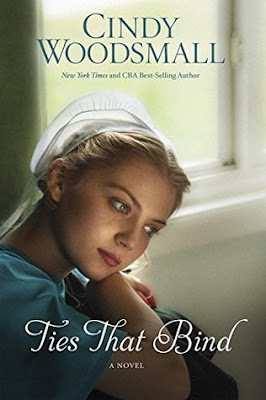 I have too many books and not enough time to read them all.  I got behind in March and have yet to catch up (I am working on it).  It is hard to stay current and catch up!  I need to quit getting more books (but there are so many good books).  If I just had a maid, gardener, cook, and a pet sitter!  A person can dream!


Ties That Bind by Cindy Woodsmall is the first book in The Amish of Summer Grove series (there will be three books).  On the night Ariana and her twin brother, Abram were born there was a fire at the birthing center.  Brandi Nash (not Amish) also gave birth that night to a little girl.  All were able to escape from the birthing center.  Twenty years later Ariana is being courted by Rudy Hershberger and is hoping to open a café in Summer Grove.  Ariana and her twin brother, Abram have been saving for the twenty percent down payment they need by October 1 for the building Ariana wishes to purchase (she has an arrangement with the owner).  Ariana works for Berta Schlabach.  While Berta is in the hospital, Ariana is taking care of her animals.  While there Ariana sees Quill Schlabach.  Quill was her friend growing up along with Frieda.  Then five years ago, they unexpectedly left the Amish community.  Since then Quill has helped other Amish leave the community, and Ariana is upset to find out that it is someone from her family that wishes to leave their Old Order Amish ways.  Ariana will do anything to prevent it from happening.

Skylar Nash is going to college and lives with her mother, Brandi in Bellflower Creek, Pennsylvania.  Brandi had Skylar at the Amish birthing center twenty years previously.  Skylar loves to sing, dance, and act.  She also gets involved with the wrong type of men who have led her to drugs.  One of Ariana’s brothers, Mark is working on a stage for the college when he sees Skylar.  He mentions to Abram (and their mother over hears them) how Skylar looks just like their sister, Salome.  Lovina Brenneman is afraid that something happened while everyone escaped from the fire.  Is the child she brought home really her daughter?  Lovina and her husband, Isaac enlist Quill’s help to find out the truth.

Quill also comes up with an idea to help Ariana raise the money she needs for the café.  Ariana is reluctant to accept any ideas or help from him, but she wants this café.  Can she trust him?  Quill just wants what is best for Ariana.  Quill would do anything for her.  He has been in love with her for many years and leaving the community was not what he wanted (but not his secret to tell).  Why did Quill and Frieda leave the Amish community?  Will helping Ariana’s parents find out the truth make Ariana push Quill further away?  What happened twenty years ago while they were escaping from the fire?  Will the truth change Ariana’s life in unexpected ways?

I found the Ties that Bind to be very slow book and can get very confusing (many characters and there is quite a bit going on in this book).  Ariana has four sisters and five brothers along with their parents, spouses, and more children.  That is just one family in the book. I have read many of Cindy Woodsmall’s books (all but two of them) and have loved them, but I had trouble with this novel.  Once I read about the fire and the babies, you knew what was going to be the outcome (very expected).  I also had trouble relating to the main character, Ariana.  I found her to be emotionally immature and very naïve (but with firm resolve that her way is the right way) for someone that is twenty years old.  I give Ties that Bind 3.5 out of 5 stars.

I received a complimentary copy of Ties that Bind from Blogging for Books (and the publisher) in exchange for an honest review.  The review and opinions expressed are my own.

Have a lovely afternoon!  Make sure to take time out of your day to do something for yourself.  Happy Reading!

Posted by Kris Anderson, The Avid Reader at 4:03 PM