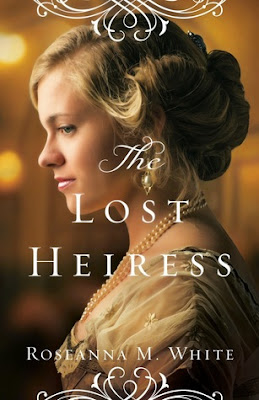 I had a rough night.  Doozy was uneasy all night and kept waking me up (he is such a sweetie though).  Then just when I got into a deep sleeper, our neighbor started playing with his motorcycle. Revving it up near my bedroom window.  I got about four to five hours sleep last night (makes me cranky).   I am hoping for a better nights sleep tonight.  I did get my father to eat a good dinner tonight (hooray) and drink his special drink (this is the adult version of children's Pediasure).

The Lost Heiress by Roseanna M. White is a historical romance novel and the first book in the Ladies of the Manor series.  It is 1910 in Monaco and Elizabeth Brook Eden is waiting for her friend, Justin Wildon.  Brook (as she prefers to be called) is hoping Justin has news for her about her real family.  Brook found out that the woman who raised her, Collette Sabatini, was not her biological mother (she found her).  Justin has found her family and he is taking her to them in Yorkshire, England.  Justin and Brook met when he was twelve and she was five years old.   Justin taught Brook to do many things like riding astride, shooting, climbing trees.  Brook has a fiery, independent personality.

Brook is taken to England to meet her family.  Her father is Lord Whitby and he recognizes her at once (she looks like her mother).  There have been impersonators over the years, so not everyone is as welcoming.  One person is Deirdre O’Malley.  Deirdre is Irish and a maid in the household.  She has a family to help support and has been feeding information to a nasty man named Lord Pratt (Lord Whitby has a sister and two nieces that also visit the house).  Justin is forced to go away soon after delivering Brook to her new family (his father and grandfather pass away).  Justin has fallen in love with Brook, but his estates need handling (money) before he can propose to Brook (he does not want Brook to think he wants her for her money).

Brook adjusts quickly to life with her family in England.  Then one day she is attacked.  Someone wants Fire Eyes (and Brook has no clue what they are talking about)!  What are fire eyes and why do they think Brook has it?  Brook is not safe until they solve this mystery.  It turns out that this mystery could have something to do with the death of Brook’s mother.  Can they figure out the mystery and solve it in time?  Will Justin be able to win Brook’s heart?

I give The Lost Heiress 4 out of 5 stars.  It is nicely written and very easy to read.  The book is twice as long as normal novel, but you would never know it (it just flows so nicely and you get lost in the book).  I easily read The Lost Heiress in a couple of hours.  I have only given you a brief overview of the book.  There is much more to it along with many more characters (sometimes it can be a little hard keeping everyone straight).  I got a little tired of the lack of communication between Justin and Brook as well as her temper (she would get mad and walk away).  Of course, Justin put up walls and would not share information with Brook.  I found that very frustrating and distracting from the book.  Otherwise, The Lost Heiress is a pleasure to read and I have a feeling that there will be another book soon (about Duke Worthing).

I received a complimentary copy of The Lost Heiress from NetGalley and The Book Club Network Inc. (courtesy of the publisher) in exchange for an honest review.  The review and opinions expressed are my own.

I hope everyone is having a lovely holiday weekend!  I am currently reading The Hired Girl by Laura Amy Schiltz.  Take care and Happy Reading!