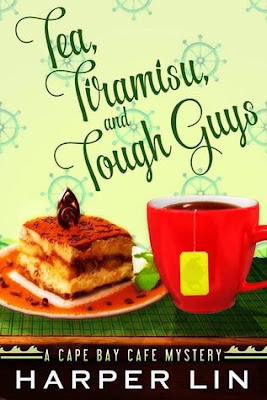 Happy Talk Like a Pirate Day!  We have some unusual holidays! My idea of a pirate is Captain Hook on Once Upon a Time!  He is such a handsome devil!  Did everyone have a good Saturday?  I did not overdue today.  My energy level was on the low end.


Tea, Tiramisu and Tough Guys by Harper Lin is a fun cozy mystery to read.  It is the second book in the Cape Bay Cafe Mysteries.  Francesca “Fran” Amaro owns Antonia’s Italian Café.  She serves all types of coffees and some sweet treats.  Thanks to a British customer, Fran is exploring adding tea drinks to the menu.  Fran and Matt Cardosi have been spending more time together since Fran solved the murder of Matt’s father.  Matt and Fran grew up together and are now neighbors.  They are also exploring have a closer relationship (as a couple).  Things are going along smoothly when the local gossip tells them that Joe Davis has been stabbed to death in the parking lot of Todd’s Gym.  Joe is a few years younger than Fran, but her second in command, Sammy grew up with Joe.  Turns out that the owner of Todd’s Gym was the guy Fran had a crush on in high school.  His name is Todd Caruthers (typical sports jock).  Fran decides to investigate the murder (she cannot help herself) despite warnings from Mike, the local police detective.

Todd turns out to be the main suspect, but Fran is sure he is innocent (based on two conversations).  Matt tries to show Fran that Todd could be guilty based on the facts.  This case puts Matt and Fran at odds with each other (I think Matt is jealous of Todd).  Who really killed Joe Davis?  Can Fran solve the case?  What will happen to the budding relationship between Matt and Fran?  You will have to read Tea, Tiramisu and Tough Guys to find out!  I found this to be an enjoyable novel to read.  It provided many laughs for me.  I give Tea, Tiramisu and Tough Guys 4.25 out of 5 stars.  My one problem is the person who committed the crime was not introduced until late in the book (and then it is obvious he committed the crime). My favorite part of a cozy mystery is solving the murder, and I did not get the opportunity with this book.  This book can easily be read without reading the first book in the series (I did).  The first book in the series is Cappuccinos, Cupcakes and a Corpse.

I received a complimentary copy of Tea, Tiramisu and Tough Guys from the author in exchange for an honest review.  The review and opinions expressed are my own.

I am off to watch Cedar Cove.  The book I am currently reading is Followed by Frost by Charlie N. Holmberg.  Have a good evening and Happy Reading!