A Killer Ball at Honeychurch Hall 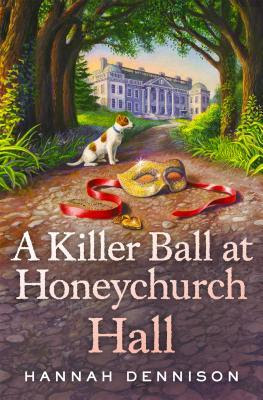 Happy Armed Forced Day!  This is a day to honor those men and women who serve bravely in all the branch of the armed forces. This day was created and first celebrated on May 20, 1950.  My father served in the navy and he had some very interesting stories.  I especially enjoyed hearing about the Panama Canal.  If you have a parent who was in the armed forces, please take the time to listen to their reminisces.


A Killer Ball in Honeychurch Hall by Hannah Dennison is the third book in the Honeychurch Hall Mystery series.  Katherine “Kat” Stanford is starting out her new business Kat’s Collectibles and Valuation Services.  Kat has been called up to the hall to evaluate and crate up a William Dobson painting (they need the money).  The ceiling in the King’s Parlor has suffered severe water damage and is in desperate need of repair (it is Elizabethan and will need a specialist to fix it).  While looking around Kat discovers a priest hole (a hidden room).  Upon entering Kat stumbles and discovers another hidey hole (it is called a double hide) and a dead body.  The body is that of a woman and it looks like she has been there for some time.  Who is this woman and how did she end up the double hide?  The priest hole is usually only told to the owner of the house who then passes it along to his heir.  Detective Inspector Shawn Cropper is called out.  Upon investigation it is discovered that this woman disappeared in June of 1958.  This leads the investigation towards Kat’s mum, Iris.  Iris is known for her secrets and not telling the truth.  Iris needs to be more forthcoming this time or she could end up in jail.  Kat will have her work cut out for her finding the real killer.

A Killer Ball in Honeychurch Hall is not a stand-alone book.  You do need to read other books in the series, otherwise the story can be confusing (trust me on this).  Some things are explained (from prior books), but not everything.  The mother, Iris was not likeable to me.  I think she is supposed to come across as humorous (and mysterious), but I just found Iris annoying.  She was too over-the-top (and not in a good way).  Secrets and lies are all Iris tells even to her daughter (and everyone else).  The murder mystery was simple, and I solved it early in the book.  There are quite a few characters in the book which can be befuddling and there is quite a bit going on.  I just told you about the murder.  There is a man sneaking about the property; Harry, the Earl’s son, is having trouble in school and everyone blames Kat because she convinced them to let Harry go to the local school; Alfred, Iris’ brother, is a thief and forger (and up to no good) are just a few things going on in A Killer Ball in Honeychurch Hall.  I give A Killer Ball in Honeychurch Hall 3 out of 5 stars. It was okay (just not for me).  The book is easy to read and has a good pace.  I am just not a fan of this type of humor and the quirky, exaggerated characters (I have no problem with quirky but do they have to be so overstated).  But many readers will enjoy it (especially if you are a fan of the series or if you like comedies).

I am currently enjoying Murder Most Fowl by Edith Maxwell.  Do not forget that Outlander is on tonight if you enjoy that show (which I do).  I was watching the season one of Wayward Pines today before the new season starts (I wish they would replay the last season for all shows). Have a wonderful evening!  Take care and Happy Reading.