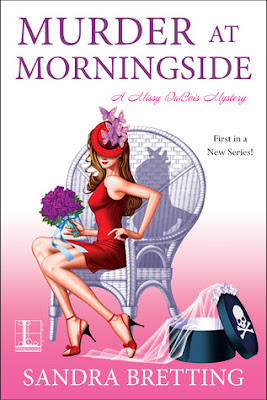 Thank you for stopping by!  I got my mother to her appointment (though she did drag her feet a little and whine on the way).  It is National Missing Children's Day.  They suggest that you go over safety issues with your child (not talking to strangers, get into strangers car, go home with someone you do not know) and keep a safety kit on your child (with a current photo, fingerprints, and such).  You can get a safety kit from your local police station.  You can never be too careful with your child.

Murder at Morningside by Sandra Bretting is the first A Missy DuBois Mystery novel.  Melissa “Missy” DuBois and her friend, Ambrose are at the Morningside Plantation to assist with a wedding of Trinity and Sterling. Ambrose is doing the gown (owns Ambrose’s Allure Couture) and Missy the veil (owns Crowning Glory).  Unfortunately, before the bride and groom so can say their I Do’s, the bride is found dead in the bathroom (what a horrible place to kick the bucket).  Who would want to kill a pregnant woman about to be married (Missy noticed the baby bump earlier in the day)?  Missy had met Ivy Solomon, step-mother of the bride, earlier at a tea (and hat contest) Missy now feels that they are friends and sets out to find the killer (friends after an hour).  Trinity was well-liked, but her father Herbert Solomon was not because of his oil refinery (and cheapskate ways).  Would someone kill Trinity to get back at her father?  Then there is the strange “ghost” being seen around the hotel.  Will Missy be able to find the killer?  You will have to read Murder at Morningside to get the answer.

I found Murder at Morningside to be contrived (very fake).  Missy DuBois is a true Southern woman (or what people believe a Southern woman to be) who keeps using various southern expressions like “bless her poor little heart” and “butter my biscuit” (I have yet to hear one southern person say any of these phrases.  Maybe I live in the wrong state).  I was not a fan of Missy (she was okay but no very believable as a real life character).  How can you consider someone a friend after knowing them an hour?  It seemed like a lame excuse to look into a murder (it would have been better if she had just admitted she was to curious for her own good). The characters were not developed.  We get basic information on them, but they were not brought to life.  There is quite a bit about a fashion show that Missy volunteers herself and Ambrose to organize and run (in a very short amount of time from scratch which is unlikely).  The book is easy to read, but I just did not enjoy it.   The mystery was child’s play to solve (the killer was extremely apparent).  I give Murder at Morningside 2.5 out of 5 stars.  I am not a fan of these silly mystery novels (which I do not know they are until I read them).  I will not be reading the next book in the series (for which I am sure the author will grateful). Murder at Morningside came out today along with Enchanted Islands by Allison Amend (which was boring).

You can follow Sandra Bretting on Amazon (to get updates on her latest novels).  The next book in the series is Something Foul at Sweetwater.  It will be out on December 20 (subject to change without notice).  I received a complimentary copy of Murder at Morningside from NetGalley in exchange for an honest evaluation of the novel.

Please remember that this review contains my feelings about the book. Just because I did not enjoy it, does not mean that you will not.  I do appreciate you visiting my blog and checking out my latest review.  Have a nice, relaxing evening (or fun and exciting if that is what you wish). Take care and Happy Reading!

Posted by Kris Anderson, The Avid Reader at 6:47 PM