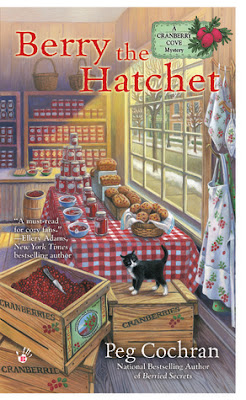 Happy May Day!  It is the first day of May.  It is also Mother Goose Day (which was created in 1987).  We all remember these tales from our childhood!  Events that occurred on May 1 in history are . . .  the Folies Bergere opens in Paris in 1869; Queen Victoria opens The Great Exhibition at The Crystal Palace in London in 1851 (it sounds grand); The World's Columbian Exposition opens in Chicago in 1893; the dwarf planet Pluto is officially named in 1930; the Empire State Building is dedicated in New York City in 1931; in 1989 Disney-MGM Studios opens Walt Disney World near Orlando, Florida (seems like it has been around forever); and Josiah Wedgwood founds the Wedgwood pottery company in Great Britain in 1759 (which is now owned by Fiskars).


Berry the Hatchet by Peg Cochran is the second book in A Cranberry Cove Mystery series. Monica Albertson is getting the Sassamanash Farm stand in town ready for the Winter Walk.  Their mayor, Preston Crowley came up with the Winter Walk as a way to bring tourists to Cranberry Cove during the winter.   People are waiting for the arrival of the sleigh with Miss Winter Walk (the mayor’s niece, Candy) and Mayor Crowley.  All of the sudden the sleigh comes down the street at a very fast pace (run away sleigh). When they finally get the horse to stop, they find Preston Crowley inside with an unusual knife in his neck.  Why would someone kill the mayor?  Turns out that Preston was dating both Monica’s mother and step-mother at the same time (talk about a busy bee).  Both women end up suspects.  Monica is determined to get them off the suspect list.  There have to be other people who were not happy with their esteemed mayor!  Can Monica find the killer while not ending up a victim herself?  Can her mother (Nancy Albertson) and step-mother (Gina Albertson) stand being in the same town without hurting each other?  You will have to read Berry the Hatchet to find out!

Berry the Hatchet was just delightful.   The book has engaging characters, a beautiful setting (can you imagine a lovely, small town with snow), and a fun mystery.  I just wish the murder mystery had been a little more difficult to solve.  I did, though, enjoy following the clues (the author provided some good clues) to the conclusion (where I confirmed I picked the right killer).  Berry the Hatchet can be read as a stand-alone book if you have not read the first book in the series.  I look forward to the next novel in A Cranberry Cove Mystery series.  I give Berry the Hatchet 4.5 out of 5 stars (if I had not been able to solve the mystery it would have been a 5).   Berry the Hatchet had just the right blend of mystery, romance, friends (and quirky characters), and family.  Peg Cochran did a very good job constructing Berry the Hatchet.  Berry the Hatchet will be out on Tuesday, May 3 (you can pre-order your copy and it will arrive on your Kindle--if you have one--just after midnight).

Berried Secrets is the first book in A Cranberry Cove Mystery series.  I received a complimentary copy of Berry the Hatchet from the author (as a part of the Cozy Mystery Review Crew) in exchange for an honest evaluation of the novel.

If you have yet to purchase a Kindle and would like to get one, they are having a great sale on Amazon.  The new Kindle Fire comes in colors (I always wanted a red one).  The Kindle 10 (which I just love) can be purchased on a payment plan and it is currently discounted!  I do, though, recommend purchasing your case on Ebay.  They are the same cases as on Amazon, but at a lower cost. I hope all of you have a nice, relaxing Sunday!  Take care and Happy Reading!