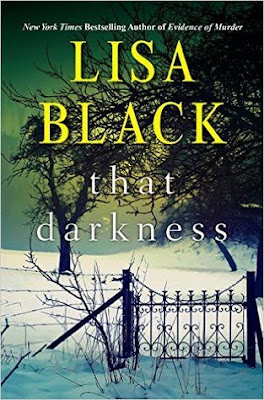 Happy Star Wars Day!  It is held on May 4 because of the line "may the force be with you" (get it).  You can have a Star Wars marathon, play with your action figures (I had a cousin who had all of them), get out your laser sword (if you are Castle) and have a fight!  On this day Margaret Thatcher was sworn in as Britain's first female prime minister in 1979 (they are way ahead of America). The first Annual Grammy Awards were held in 1959. In 1932 Al Capone began serving his eleven year sentence for tax evasion (can you believe it) in Atlanta.  And in 1904 the United States began construction of the Panama  Canal.

That Darkness by Lisa Black is supposed to be a suspense thriller. It is the first book (such a pity) in the Gardiner and Renner series. Jack Renner is a vigilante and a cop.  He has decided he is guilty and is taking them out one by one.  Maggie Gardiner is a fingerprint officer in the crime lab.  She does, though, fill in where needed including going out to crime scenes.  She is good at putting together clues to help the detectives (she is actually better than the detectives who get bored with her scientific talk).  Will Maggie be able to piece together the clues and discover that Jack is the killer?  What will Jack do when Maggie uncovers his crimes?

That Darkness had no suspense or thrills.  We know who the killer is and how he does it.  We just follow Maggie as she solves the crimes and Jack tries to stay ahead of her.  That Darkness reads more like a police procedural manual than a fiction novel.  I had a hard time getting through this book (I read two other books while I was supposed to be reading this novel).  The characters are not really likeable (and have questionable morals).  I could not wait to finish ThatDarkness.  I will not be reading any more books in this series (sorry).   I give That Darkness 2 out of 5 stars (I took pity on it).  That Darkness is just not my type of novel.  I want more interest (the best part of mysteries is solving the crime).  I like to be drawn into the story and feel that I am a part of it (and I like solving the crime).  The novel includes many details on fingerprints (which I liked), fibers (hair, rugs, wool, etc.), and dead bodies (autopsies).  Some of it was interesting, but it did bog down the story (it got a little too technical at times which was when I drifted off).  Somehow it is better on television than in print.  I just did not enjoy this book.  The basic idea (premise) is good, but I did not enjoy the final product.

To get updates on Lisa Black's latest release, "follow" her on Amazon.  I received a complimentary copy of That Darkness from NetGalley in exchange for an honest evaluation of the novel.

I am off to watch Arrow, Supernatural, Nashville, and Heartbeat!  I have a wonderful new gizmo that I received for Mother's Day (a little early).  It is a stand to hold my Kindle so I can read hands free.  It stands on the floor and is adjustable.  I love it (picture below).  I hope all of you have a great evening.  Thank you for stopping by.  Take care and Happy Reading! 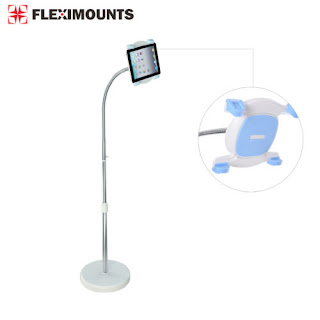 Posted by Kris Anderson, The Avid Reader at 8:27 PM