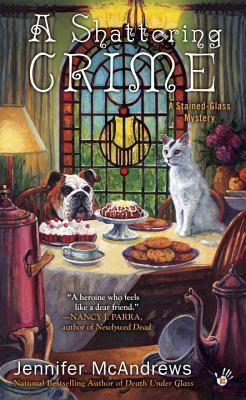 I tell you that when it rains (not literal rain) it pours!  I mean problems with a house.  A leaking ceiling in my kitchen (there is no plumbing in the attic in that area and no leak in the roof), the cats made an utter mess (I cannot figure out how they got the kitty city apart), sick dog, my mother decided today was a good day to be talkative (I am not a chatty type of person), and it looks like someone got into our workshop (where I keep the tools).  This is just a few of the things that happened today.  I get one thing done and something else happens.  I want to climb back in to bed and pull the covers over my head.  Have you had a day like this recently? I am sure that all of us have these type of days!  I can just hope and pray that tomorrow is a better day (I am channeling Scarlett O'Hara).

A Shattering Crime by Jennifer McAndrews is the third book in A Stained Glass Mystery series.  Georgia Kelly is a CPA, but she prefers working with stained glass (she is an artist).  Georgia has been making a living by selling small stained glass pieces and jewelry (like her fairy chime earrings) that are being sold at local stores (like Aggie’s Gifts and Antiques).    Georgia is attending the ground breaking ceremony for the new Riverside Promenade in Wenwood, New York with her boyfriend, Tony Himmel (a contractor).  Unfortunately, there is a group protesting the new shopping complex led by David Rayburn (for political reasons).  The highlight of the event are the delectable delights being served by Rozelle Shurz from her bakery.  Rozelle is seeing Georgia’s grandfather, Pete (aka Grandy).  When David (the protestor) turns up dead, Rozelle ends up at the top of the suspect list.  Rozelle had made special pastries for David (gluten free).  Georgia knows Rozelle would never hurt anyone and sets out to prove her innocence (Grandy wants Rozelle’s name cleared).  Georgia is also having to deal with her cat, Friday who has been making the most awful racket (those of us who own cats know what the noise means).  Georgia takes her to Dr. Bucherati, the local veterinarian, and finds out Friday is in heat (definitely explains the caterwauling).  Then Georgia’s mother, Joanne arrives in town (and takes over Georgia’s bedroom) with her new husband, Ben Sutter (a condescending scumbag—pardon my language).   They feel that Georgia is not on the right track with her life, and they spend their time badgering her about her life choices.  The investigation gives Georgia a good excuse to avoid home.  Then there is her boyfriend, Tony.  His current job is ending and he needs to decide upon his next job.  Tony wants to talk to Georgia, but Georgia does not wish to talk to him (she has commitment issues).  Life is never dull.  You will have to read A Shattering Crime to find out how it all turns out!

The mystery in A Shattering Crime not only took a backseat in this novel, but it was in the trunk in a locked box (maybe a pretty stained glass box).   The crime investigation really did not start until the second half of the book and then it is still not a dominate part of the storyline.  The killer is extremely easy to figure out despite the few clues the readers are given (I could have told you the killer as soon as the guy keeled over).  The majority of the book is about Georgia, her life, her family, the cat, and her “issues”.   Georgia has extreme commitment issues (which I found exceedingly annoying after a while).  Georgia had to move out of her bedroom and into guest room for her mother’s visit, and Georgia did not like it (which she made it evidently clear).  The bedroom issue was mentioned five times and then I stopped counting.  I thought too much time was devoted to Georgia’s thinking and her insecurities.  It is supposed to be a cozy mystery, and I wanted more mystery! I give A Shattering Crime 3 out of 5 stars (it was okay).  I did not find A Shattering Crime as good as the first book in A Stained Glass Mystery series.  The best part of the book was about the cat in heat (it was funny the way the sound was described)!  Grandy was my favorite character.  I liked him and his attitude.  Will I read the next book in the series?  Yes.  I will give A Stained Glass Mystery series another chance (every series deserves a second chance).

The first two books in A Stained Glass Mystery series are Ill-Gotten Panes and Death Under Glass.  I received a complimentary copy of the book in exchange for an honest evaluation of the novel which does not influence my review in any way.

I sincerely hope all of you have a delightful evening.  I am off to eat dinner (hide in my room) and finish Cracked to Death by Cheryl Hollon.  I will return tomorrow with another entertaining book review!  Take care and Happy Reading!


Posted by Kris Anderson, The Avid Reader at 7:32 PM