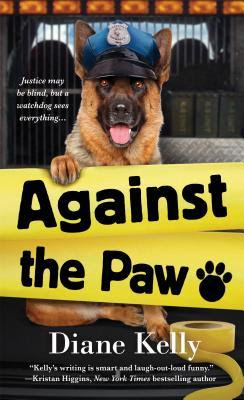 Happy Monday!  It has been a very rainy twenty-four hours here in Florida (it is still raining).  There is a tropical storm in the area. About 2 a.m. my whole room shook.  I went to investigate (I was still awake) and there is a big branch (giant limb) on our roof.  We have also discovered a leak in the roof in my mother's room.  Home ownership is not for the weak!  What is it like in your area?

Against the Paw by Diane Kelly is the fourth book in A Paw Enforcement series.  Megan Luz is an officer with the Fort Worth Police Department.  Megan’s partner is Sergeant Brigit (Megan does not play well with others—a Taser was involved).  Megan is a patrol officer and they are currently on the lookout for Ralph Hurley, a dangerous fugitive. He targets females (who are alone), breaks in, steals their debit cards and coerces their PIN from them (awful man).   In addition, a peeper has popped up!  Megan is determined (and a little fixated) to catch this creeper before he escalates. The press dubs him the Berkley Place Peeper (not very original). The local neighborhood watch is getting involved thanks to Garrett Hawke, president of Berkley Place Neighborhood Watch.  Garrett is very proactive and is increasing the neighborhood watch patrols (and getting in the way of the police).  Will Megan and Brigit be able to find this guy (without getting into more hot water with the chief)?   Of course, Brigit might go on strike. The vet stated that Brigit needs to lose some weight, but Brigit does not agree.  Brigit looks forward to her rewarding liver treats (for doing a good job).  Megan has her work cut out for her.  Join Megan and Brigit in Against the Paw to see if their hard work pays off with an arrest (and treats for Brigit)!

Against the Paw has good writing, some interesting characters, and a good setting of Fort Worth, Texas.  I love Brigit’s comments (she gets her own chapters). They are hilarious and provide a nice humor to the book.  I love how she manages to get her treats despite her diet.  Dogs can be stubborn and that is shown with Brigit.  She loves her work as long as she gets the appropriate rewards (food).  Brigit is a nice contrast to Megan.  The story is told is alternating points-of-view:  Megan, Brigit, and “Tom” (the peeper).  There are parts of the novel that I really did not like.  There is one character, Derek “The Big Di—“ Mackay that is rude, crude, and sexist.  I really wish the author would write him out of the series (he is what prevents this book from being a true cozy mystery).  Mackay is sexist and makes horrible (degrading) comments.  I do not understand why Megan does not file a sexual harassment complaint with human resources (I would document his comments and find a way to record them).  I know it is just a book, but Mackay and his remarks extremely offensive (and they affect my enjoyment of the novel as well as the rating I give it).   I thought it was easy to figure out the identity of the peeper.  I give Against the Paw 3.75 out of 5 stars.  The book does contain some foul language and there are a couple of slow areas.  I thought there was a little too much of the book devoted to the romance between Megan and Seth Rutledge (bomb person with the Ft. Worth Fire Department).    We get to see them on a date and then a double date (and then there is Sean’s mother).  Will I read the next book in the series?  Yes.  I can hope that Mackay gets another Taser taken to his nether regions (that really made me laugh because he deserved it).  Also, I like the characters and want to see what happens with them (especially Brigit).  Against the Paw can be read as a stand-alone novel (the author does a good job of bringing the reader up-to-date).

The other novels in the A Paw Enforcement series are Paw Enforcement, Paw and Order, and Laying Down the Paw (such cute titles).  I received a complimentary copy of Against the Paw from NetGalley in exchange for an honest evaluation of the novel.

Tomorrow (Tuesday, June 7) is book release day!  Some great books are coming out!  I will share some titles with you tomorrow. I am currently reading Liar Liar by M.J. Arlidge (great series). Have a great evening (you deserve it), stay dry, and Happy Reading!