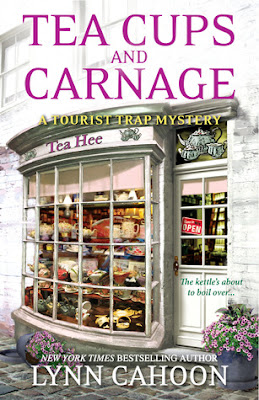 We are halfway through the week and then we get to enjoy a three day weekend!  The Fourth of July will be here before you know it. I am giving up on the plumbing.  If it was anywhere but the attic (where it is so very hot), I would keep going.  But I have had enough of the itchy insulation (I break out in a horrible rash).  I am calling a plumber and letting them fix it. I admit defeat!  I believe I should have taken a plumbing course in college (silly me, I took computer classes).

Tea Cups and Carnage by Lynn Cahoon is the seventh book in A Tourist Trap Mystery series.  Jill Gardner lives in South Cove, California and owns Coffee, Books, and More (CBM).  It is a shop that sells coffee, treats, and books (she combined two things she loves and enjoys).  Jill is getting ready for the Summer Beach Blast Party that the town is hosting.  CBM will have their mobile coffee annex at the beach which will stretch their staff thin (she really should have hired more help).  There is a new business in town. Kathi Corbin is from Melaire, Texas (a small town) and opening a store called Tea Hee (a very odd name for a shop).  The men in town are fascinated by Kathi and her Southern accent (much to the other women’s puzzlement).  Things are looking up until a motorcycle riding man starts causing havoc around town.  The police keep trying to catch him, but they have not succeeded.  Aunt Jackie ended up hurting her ankle trying to avoid being hit by this maniac.  Then a woman is going around to the various shops looking for a job.  Ivy Corbin has followed her sister to South Cove from Texas (she is supposed to be taking care of their father).  There is evidently difficulty between the sisters.  Then the police are called out to a dead body at The Coastal Inn.  At first they do not know his identity, but, after a little investigating, they find out that it is Daryl Corbin (another Corbin).  He is a cousin to the sisters.  Something smells fishy in South Cove, and it is not from the nearby ocean.  When Kathy ends up at the top of the suspect list, Jill tries to clear her name. Kathi seems to be running from her past, and it has caught up with her in South Cove.  Jill’s boyfriend, Greg King (and South Cove Police Detective) does not like her investigating (even though it usually helps his case).  Jill is also having an issue with CBM.  A check for the library event that Jill helping organize goes missing.  The bank knows it has been cashed, but they are unable to provide any further information at this time (which is extremely odd).  In the meantime, Jill is worried and looks into the matter. Could one of her loyal employees taken the check?  It is going to be a busy week in South Cove.  Join Jill and her friends for another adventure in Tea Cups and Carnage!

Tea Cups and Carnage was a cute story.  It is easy to read and had a good flow.  The mystery, though, was simple and easy to solve (I wanted it to be more complicated).  I also did not understand why Jill would accuse her loyal employees of taking the check (can you imagine).  There is a perfectly logical explanation for the missing check staring her in the face (spoiler), but it does not seem to occur to Jill.  There were several things happening in the book (too much).  I did not mention everything (yes, there is more).  The novel was a little all of the place.  It needed more focus (and not on the check).  The mystery was shoved in the background in this novel instead of being center stage.  There also needs to be less focus on the romances of the various characters.  I like a little romance in a cozy mystery, but it should not be the focal point.  I give Tea Cups and Carnage 3 out of 5 stars.  I will be reading the next book in A Tourist Trap Mystery series when it comes out (a writer can have an off book now and then).  I do hope that Lynn Cahoon gives her characters more than cheesecake in the next novel (there was quite a bit of it in Tea Cups and Carnage).  I believe Coffee, Books, and More needs a variety of treats for its customers (and readers)!

The other novels in A Tourist Trap Mystery series are Guidebook to Murder, Mission to Murder, If the Shoe Kills, Dressed to Kill, Killer Run, and Murder on Wheels.  I received a complimentary copy of Tea Cups and Carnage from NetGalley (and the publisher) in exchange for an honest evaluation of the book.

I am currently reading Fixin to Die by Tonya Kappes.  It is the first book in A Kenni Lowry Mystery series. I hope all of you had a great Wednesday. Take care and Happy Reading!

Posted by Kris Anderson, The Avid Reader at 8:46 PM