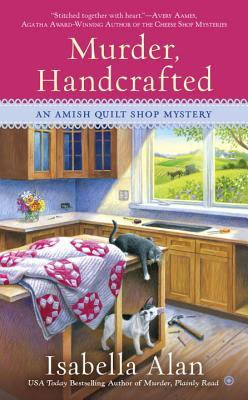 Happy Book Release Day!  I just love this day because of all the new books that show up on my Kindle!  Before my Kindle I would pre-order and have them delivered (or run out to a local bookstore). Are you looking forward to a certain book today?  A few of the books are Books of a Feather by Kate Carlisle (check in with Brooklyn Wainwright and her fiance, Derek Stone), Knit to be Tied by Maggie Sefton, Eclair and Present Danger by Laura Bradford, The Calamity Cafe by Gayle Leeson, A Premonition of Murder by Mary Kennedy, A Haven on Orchard Lane by Lawana Blackwell, Murder at the Mansion by Janet Finsilver, Dead End Street by Sheila Connolly, Stitches in Time by Terri DuLong, Liar Liar by M.J. Arlidge, and The Ringmaster's Wife by Kristy Cambron are just a few.  I will be reviewing all of these books here on my blog (reading them was the easy part).


Murder, Handcrafted by Isabella Alan is the fifth Amish Quilt Shop Mystery novel.  Angela “Angie” Braddock owns Running Stitch in Rolling Brook, Ohio.  Angie gets a call that her father hurt himself (his back) trying to take down cabinets in her parent’s kitchen (they are starting a renovation).  Her father insisted he could do it (you watched some videos).  Angie hurries over to her parents’ house with her dog, Oliver (she takes him everywhere with her).  While Daphne  (Angie’s mother) takes Kent (Angie’s father) to the hospital, Angie gets her best friend, Jonah Graber (they grew up together) to finish the kitchen.  Jonah is getting assistance from Eban Hoch, a newcomer to Rolling Brook.  But then Jonah finds out that the electrician is Griffin Bright.  Jonah blames Griffin for the death of his cousin, Kamon.  But the two agree to work together to complete the kitchen.  Things proceed until Angie gets a call early one morning.  She rushes over and finds out that Griffin Bright is dead (this kitchen project seems doomed).  He was electrocuted.  Jonah ends up being the number one suspect.  Sheriff James Mitchell (and Angie’s boyfriend) knows that Jonah would not hurt anyone, but he has to follow the evidence (which points to Jonah).  Angie blames herself since she got Jonah involved in the project and sets out to clear Jonah’s name.   Miriam, Jonah’s wife, intensely dislikes Angie (I believe she dislikes Angie more than the goat, Petunia—did I mention Jonah’s goat mowing service).  Angie does not understand why and this incident is not helping the situation.  Maybe Anna, Jonah’s mother can shed some light on the situation.  Angie will have to rely on her capable employee, Mattie Miller to take care of Running Stitch.  But Mattie has been a little secretive lately.  Something is up with her.  Then there is the Bigfoot problem!  Life is certainly not dull in Rolling Brook, Ohio.  Join Angie in her investigation in Murder, Handcrafted.

Murder, Handcrafted is just charming.  I liked how the murder was committed (very clever), but I was quickly able to identify the killer.  The Bigfoot subplot was funny and added some humor to the story (but was not too ridiculous).  There was a lack of clues in the book.  They did not seem to pop up until right before the reveal of the killer (not that you need them, but I like finding the clues in the story).  The novel had a sweet, romantic ending that I enjoyed.  I give Murder, Handcrafted 4 out of 5 stars.  I did find that some information was repeated a couple of times.  Overall, the novel is well-written and had a good flow (pace) which made for a pleasurable reading experience.  I will definitely be reading more books by Isabella Alan (aka Amanda Flower) in the future.  There is a preview of Prose and Cons at the end of the book.

The other novels in the Amish Quilt Shop Mystery series are Murder, Plain and Simple, Murder, Simply Stitched, Murder Served Simply, and  Murder, Plainly Read.  I received a complimentary copy of Murder, Handcrafted from NetGalley (thanks to the author and her publisher) in exchange for an honest evaluation of the novel.

Thank you so much for visiting and reading my review.  I hope everyone had a delightful day!  The rains have finally passed in our area and now I have to pick up all the debris littering the yard (lots of limbs).  Take care and Happy Reading!


Posted by Kris Anderson, The Avid Reader at 6:54 PM