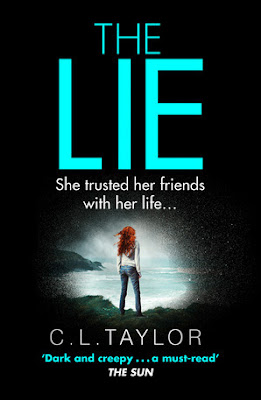 I hope all of you have had a delightful Sunday.  I read for a while and then had to go run a few errands (I never said I like an exciting life).  I then cooked are big Sunday dinner.  I grew up with special dinners on Sunday and have continued the tradition.  My mother wanted meatloaf (yuck) and baked potatoes today.  Do you have a Sunday tradition with your family?

The Lie by C.L. Taylor is about a woman with a secret in her past and the past is about to catch up with her.  Jane Hughes is living in Wales, has a job she enjoys at Green Fields Animal Shelter, and is dating William Smart.  But Jane has a secret and a past that she would like to forget.  Unfortunately, someone does not want to let the past stay forgotten.  One day Jane gets a note and it opens up the door to the past.  We go back five years to Emma Woolfe.  Emma and her friends (Leanne Cooper, Al Gideon, and Daisy Hamilton) are thinking about taking a vacation to get Al over her recent breakup (especially after they had to help break up at fight at a bar).  The four of them have been friends for a while, but there is some tension in the group.  They decide to go to Nepal and spend time at the Ekanta Yatra retreat (can only be accessed by walking).  There is more to Ekanta Yatra then meets the eye.  It is not quite the retreat it was made out to be.  The leader, Isaac woos the women and Daisy is infatuated with him (but jealous of the attention he pays to other women).  There is soon trouble within the group.  Emma believes there is something wrong at Ekanta Yatra.  When Emma finds out what is really going on at this place, she is ready to leave.  But leaving is not as simple as it sounds.  Five years into the future and it is evident that someone knows about Jane’s (aka Emma’s) past and they are coming after her.  We get to see what happened in Nepal and what the person after Jane really wants.  Read The Lie to see how it plays out.

The Lie sounded like such a good thriller, but it was not as exciting as it sounded.  It is a dark (crude) tale that I really did not enjoy.  The book contains fighting, stalking, foul language, intimate relations, drugs, drinking, etc.  The book goes back and forth from the past to the present and it gets confusing.  There are quite a few characters and it can be hard to keep them all straight (I just tried to focus on the main character).  The pace slows down considerably in the middle of the book but picks back up near the end.  Was it full of suspense and intrigue?  Not so much.  I did not like Jane (Emma) very much.  She overreacts to everything which grew old quickly.  I give The Lie 2.75 out of 5 stars (I have to admit that I being generous).   It was obvious to tell was Ekanta Yatra was from the very beginning, but these idiotic girls continued to stay (even when it was obvious that there was something very wrong going on).  Several parts of the story were very unbelievable (it had me yelling at my kindle).  The best part of the book were the animals at Green Field’s Animal Shelter.  The Lie was just not for me.

You can check out C.L. Taylor's other novels on Amazon. I received a complimentary copy of The Lie from NetGalley in exchange for an honest evaluation of the novel.

I hope everyone is prepared for a new week.  I have to take my mother to another doctor's appointment tomorrow (wish me luck). I am looking forward to the new Aurora Teagarden movie tonight.  I like to see if I can solve the crime before they reveal the answer. Have a great evening, take care, and Happy Reading!


Posted by Kris Anderson, The Avid Reader at 7:06 PM