Murder at the Mansion 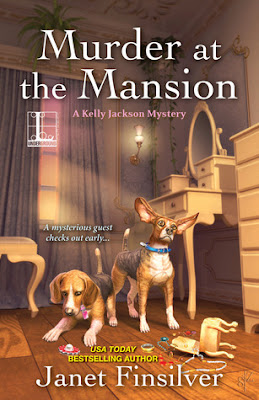 Happy Saturday!  How is everyone doing today?  I was supposed to go run errands, but I did not feel up to it.  The work on the roof just wore me out (plus the heat).  I am currently watching Lil' Dickens play on the cat tree in my study. He is having so much fun especially with the dangling mouse. Doozy, my dog, is trying to convince Dickens to come down and go back to the cat side of the house (Lil' Dickens is ignoring Doozy).  Animals can be entertaining.  I have tried to get a picture, but Dickens keeps moving (so all I get are blurs).

Murder at the Mansion by Janet Finsilver is the second book in A Kelly Jackson Mystery series.  Kelly Jackson has just arrived in Red Cove, California at the Redwood Cove Bed-and-Breakfast where she is the new manager.  The B and B has been undergoing renovations and is not quite ready to open yet.  Kelly’s boss, Michael Carrigan, has tasked her with doing an inventory of Redwood Heights (a property that he is selling and has been experiencing thefts).  Kelly is at Redwood Heights when a scream is heard.  Kelly rushes into the lobby to find guest, Sylvia Porter at the bottom of the stairs.  Sylvia is upset and states someone pushes her.  Margaret Hensley, temporary manager of Redwood Heights, is courteous, but it is obvious she believes the guest fell (and was not pushed).  Evidently, Sylvia has been a demanding guest since her arrival.  The Whale Frolic Festival is happening that weekend in Redwood Cove. Margaret asks for Kelly’s help on an outing for the guests.  Sylvia asks to return to the inn early to rest but wants to be awakened in time for the tour (they offer tours of the historic Redwood Heights with a costumed docent).  Kelly goes to awaken Sylvia and receives no answer.  Kelly gets the master key and enters the room to find Sylvia dead at the dressing table.  Kelly immediately locks the room (after taking in some key details) and contacts the police.  Is Sylvia’s death related to the thefts?  Something odd is going on at Redwood Heights, and Kelly sets out to investigate.  She enlists the help of her friends, the Silver Sentinels (Ivan, Rudy, Gertie, Mary, and the Professor).  Will they be able to solve the riddles before there is another victim?

Murder at the Mansion was a cute cozy mystery novel.   It has engaging characters, it is easy to read, has a beautiful setting, and an interesting mystery.  It is the second book in the series, but can easily be read alone.  I give Murder at the Mansion 4.25 out of 5 stars (I liked it).  I just wish the mystery had been more difficult to solve (though the author did a good job as misdirection).  I was able to pick out the guilty party early in the book (thanks to one clue).  I liked the authors handling of the thefts.  It was very unique and clever.  I will definitely read the next novel in A Kelly Jackson Mystery series.

Murder at Redwood Cove is the first book in A Kelly Jackson Mystery series.  You can check out the author at www.janetfinsilver.com and on Facebook.  I received a complimentary copy of Murder at the Mansion from NetGalley (and the publisher) in exchange for an honest evaluation of the novel.

I am currently reading The Heart Answers by Colleen Coble.  I hope all of you have had a great day and have a very good evening. I am off to read. Outlander is on tonight (such a wonderful series). Take care and Happy Reading!


Posted by Kris Anderson, The Avid Reader at 6:25 PM