Death of a Wolfman 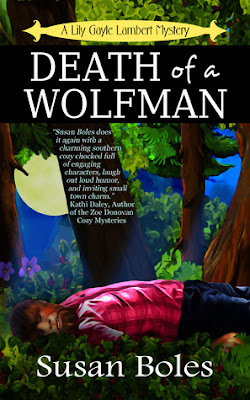 Happy Thursday!  I want to tell you about a new book that came out today.  It is A Nightingale Christmas Carol by Donna Douglas. It is the eighth book in the Nightingales series. This is such an enjoyable and heartwarming series.

Death of a Wolfman by Susan Boles is the first novel in A Lily Gayle Lambert Mystery series.  Lily Gayle Lambert lives in Mercy, Mississippi.  Lily Gayle is hired by LizBeth Mitchell to do her family genealogy.  Lily Gayle is known for sniffing out the obscure and unusual (she is nosy).  That evening (Halloween night), Lily Gayle is having dinner with her cousin, Ben (the county sheriff), when he receives a call.  He believes it is a prank so he lets Lily Gayle tag along.  It turns out not to be a prank.  There is a very hairy man dead in a clearing in the woods.  The man resembles a werewolf (and he is missing clothing).  Lily Gayle has another theory behinds the man’s hairy exterior.   The autopsy reveals the victim was shot with a homemade silver bullet.  It looks like someone else thought he was a werewolf.  Who is the poor man and why was he shot?  LizBeth calls Lily Gayle and asks to meet with her at the family gazebo the next morning.  Lily Gayle shows up to find LizBeth dead (it is gruesome).  This sends Lily Gayle running and screaming (they probably heard her in the next county).  Is there a chance the two murders are connected?  Someone wanted to keep LizBeth quiet, but Lily Gayle is determined to get those answers.

Death of a Wolfman did not feel like a first novel in the series.  I felt that the reader was missing information about Lily Gayle and her past.  Death of a Wolfman is easy to read and is nicely written.  There is humor that many readers will enjoy (you will laugh your way through the book at Lily Gayle’s antics).  I did find the mystery too simple and the killer was obvious.  I knew LizBeth would end up dead as soon as she requested the genealogy project from Lily Gayle.  I found Ben, Lily Gayle’s cousin, to be extremely overprotective.  I know he was looking out for her, but, personally, I found it offensive at times.  I know it is just a book but would you want someone telling you where you can and cannot go (restricting your daily movements).  Of course, Lily Gayle could have exercised more caution (but she is nosy and determined).  I give Death of a Wolfman 3.5 out of 5 stars.  There is a beautiful description of a dress Lily Gayle is making in the novel (I could picture it in my mind).   Those of you that watch CSI (the Vegas version) will remember the episode with the wolfman which you will find referenced in this book.  It is a good first book, and it will be interesting to see what happens in the next novel in The Lily Gayle Lambert Mystery series.  Death of a Wolfman is available on Kindle Unlimited.  You can follow Susan Boles on Amazon and Facebook.

I am off to enjoy dinner.  I am making homemade pizza for dinner (a favorite with my family).  I want to thank you for visiting and hope all of you have a lovely evening.  Make sure to take time for yourself before the hectic Thanksgiving preparations begin.  Take care and Happy Reading!