Duty to the Crown 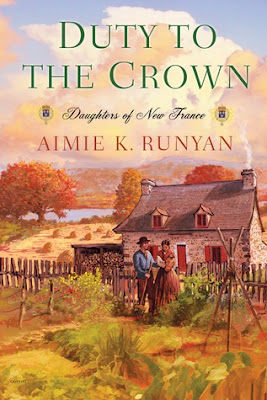 Happy Thanksgiving!  I hope everyone is having a very special day. Holidays can be difficult with all the various family members and friends, their emotions and personalities (and nowhere to hide). Glow of Death by Jane K. Cleland comes out on November 29 along with First Degree Mudder by Kate Dyer-Seeley.  I will be reviewing both novels soon.

Duty to the Crown by Aimie K. Runyan is the second book in the Daughters of New France series.  We join Manon, Claudine, Emmanuelle and Gabrielle in New France (Quebec settlement) in June 1677.  Manon Lefebvre has been living with the Huron’s since she left Alexandre and Nicole Lefebvre’s home five years prior.  Mother Onatah, sister to the chief, took in Manon.  But then a deadly fever hits the village and despite Manon’s best efforts, Mother Onatah passes away.  The chief of the Big Turtle clan immediately tells Manon to leave (talk about cruel).  Nicole Lefebvre welcomes Manon and Tawendeh (Mother Onatah’s son) them into their home.  Nicole is thrilled to have Manon back (she was so upset when Manon left).  Manon feels like she does not fit into either world (French or Huron).  Claudine Deschamps, Nicole’s younger sister, is hoping to make a prestigious match with an eligible bachelor.  Claudine imagines a life of luxury, but one wrong move can lead her down a very different path.  Emmanuelle Deschamps usually can be found with her nose in a book.  She has a kind personality and Claudine looks down upon her.  Gabrielle Giroux was taken in by Elisabeth and Gilbert Beaumont along with her brother, Pascal.  Since Gabrielle was born in New France, an edict states she must marry by her sixteenth birthday or the Beaumont’s will be forced to pay a penalty.  Not many men are willing to marry the daughter of the town drunk (her birth father).  Join these young women in New France as they experience love, friendship, heartache, and loss.

Duty to the Crown is not a stand-alone novel.  You do need to read Promised to the Crown (first book in series) in order to understand the characters and their various relationships.  Aimie Runyan does a superb job of capturing time and place (Quebec settlement in New France in the late 1600s).  The novel has great characters, excellent writing, and is ripe with emotion.  You will laugh, cry, sigh and smile as you work your way through Duty to the Crown.  It was good to see how the characters grow over the course of the book.  We also get to revisit the characters from the first novel (Nicole, Alexandre, Elisabeth, Gilbert) to see how they are faring.  I give Duty to the Crown 5 out of 5 stars (I enjoyed it very much).  I kept reading this page turner until I finished it (I did not want it to end, but I wanted to see how it ended).   I look forward to reading more novels by Aimie K. Runyan in the future.  Promised to the Crown is the first novel in the Daughters of New France series.

Thank you so much for visiting!  I am off to relax. I am wore out after the cooking and the cleaning up.  There is a new movie on Hallmark tonight called Christmas in Homestead.  I will pop some popcorn and enjoy. Take care and Happy Reading! 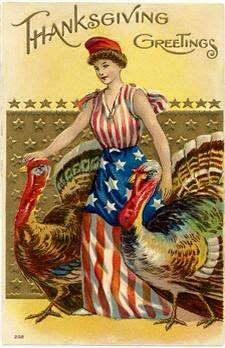 Posted by Kris Anderson, The Avid Reader at 7:54 PM