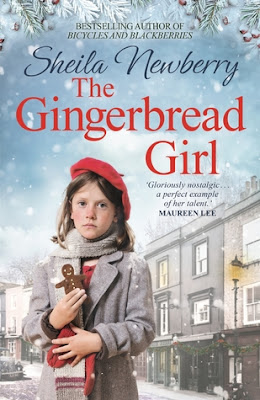 It's Friday!  One week from today on November 25 Gilmore Girls: A Year in the Life episodes start.  I happen to love Gilmore Girls, and I am very much looking forward to the new shows.  They will only be on Netflix (that's the only downfall).

The Gingerbread Girl by Sheila Newberry starts in November of 1936.  Cora Kelly is seven years old and is getting released from the hospital after an eight month stay for diphtheria.  The disease hit their East London tenement where the children had not been vaccinated against diphtheria.  The one thing that Cora has treasured is a gingerbread man Cora received from her mother (during a secret visit).  Cora did not eat the gingerbread man.  She has kept it as a reminder of her mother.  Upon her release, Eliza Quinn (her mother’s best friend) takes her to Westley Farm (belong to Eliza’s aunt) for the fresh air and relaxation.  Ginny Brookes runs the farm with the help of her two sons’ Mal and Jimmy.  Cora enjoys spending time with Jimmy (this is just the beginning of their story).  When Cora is ready to return home, Eliza comes to get her.  Cora is in for a shock when she finds out that her mother, Biddy passed away after giving birth to her sister, Deidre (Dede).  Cora’s birth father, Bertie took off long before and Eliza has no way of locating him.  Eliza is going to raise Cora and Dede.  Eliza is a housekeeper for Mr. Norton and his son, Neville (a real pill).  Mr. Norton is a retired baker and the son has taken over the business.  Things are going well for this little family when Bertie returns.  He wishes to get to know his daughter (he is unaware of Dede).  Will Cora give him an opportunity? Join Eliza and Cora in see what life was like for them during World War II.

The Gingerbread Girl is the story of Eliza and Cora.  We follow Cora and Eliza as Cora grows up, they experience the war, love, and loss.  The Gingerbread Girl reminds me of a children’s novel (chapter book similar to those by Laura Ingalls Wilder), but there are adult situations that would not be appropriate for someone under the age of 13 (would depend on the child’s maturity level too).  It is an interesting story that I did enjoy reading, but there are some slow sections.  The novel is simple and easy to read.  I give The Gingerbread Girl 3.5 out of 5 stars.  It is a sweet story that is nicely written.  Americans can see a different take on the war (it started much earlier in England than it did in the United States).

I am off to watch Gilmore Girls marathon on Up!TV called Gilmore the Merrier.  They are showing every single Gilmore Girls episode over the next week.  During the commercials I am reading Prose and Cons by Amanda Flower (it is wonderful).  I hope all of you have a delightful evening.  Take care and Happy Reading!


Posted by Kris Anderson, The Avid Reader at 7:45 PM