A Death at the Yoga Cafe: A Keeley Carpenter Mystery 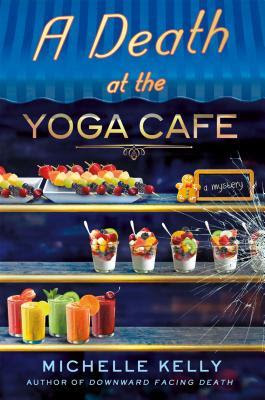 Greetings!   I hope all of you have had a good Thursday.  I got a special treat today.  My daughter came over with dinner.  It is so nice when I do not have to cook (we had Italian).


A Death at the Yoga Café by Michelle Kelly is the second book in A Keeley Carpenter Mystery series.  Keeley Carpenter is the owner of Yoga Café in Belfrey, England which serves vegetarian fare.  The space used to be her father’s butcher shop before he passed away.  Keeley lives in the apartment above the shop and she teaches yoga in her spare time.  Keeley is listening to Duane moan about the loss of his girlfriend, Raquel (broke up with Duane to date Gerald Buxby, the local mayor) when her friend, Megan comes in.  Megan is assisting with the Belfrey Art Festival.  They are asking local shop owners to let artists display their work.  Megan wants Keeley to host Suzy’s work.  Keeley agrees despite Suzy’s negative attitude and expression.  Their discussion is interrupted by an argument in front of the café between Gerald and Raquel (which perks up Duane).  After the hubbub settles down, Keeley’s critical mother, Darla arrives for a visit (early).  Keeley is grateful to escape for a relaxing evening with her boyfriend, DC Ben Taylor.  Unfortunately, their night is interrupted when Ben is called out on a case.  Keeley later finds out that Gerald was found stabbed in his home.  Raquel ends up being the prime suspect because of their public spat.  Ben asks Keeley to stay out of the investigation.  Keeley tries to comply, but Raquel asks for Keeley to help in clearing her name.  Keeley manages to stay one step ahead of Ben (much to his frustration).  Then Edna, Gerald’s longtime housekeeper, is found dead after Keeley talked with her.  Keeley has stumbled upon some information that the killer does not want to come to light (at least not yet).  Will Keeley be able to clear Raquel’s name without falling victim to the killer?  Will Keeley regret letting Suzy display her work at the Yoga Café?

A Death at the Yoga Café may be the second book in the Keeley Carpenter mystery series, but it can be read alone.  The author summarizes the first book and provides the needed background information on Keeley.  The novel is easy to read and has interesting characters. I also enjoyed the beautiful setting (I love books set in England).  I give A Death at the Yoga Café 3 out of 5 stars.  The mystery was not complicated and could be solved early in the novel.  One word gave away the identity of the culprit.  I wish authors would put as much work into the mystery as they do the zany characters (like Mega and Suzy) they include in their books.  The whole point of a cozy mystery is the mystery (they are not supposed to be gory, but they can be hard to solve).  I had a hard time relating to Keeley.  I think I need to be younger (or into yoga).  Keeley has self-confidence issues (many doubts).  Of course, her overly critical mother did not help.  I did not understand why Keeley felt compelled to help Raquel.  She states it is because she did not want to see an innocent person go to jail.  Would you help your nemesis?  Would you be willing to die for your arch rival?  At the end of each chapter is a yoga post, definition, method, benefits, and contraindications.  I wish they had not been at the end of every single chapter.  I found it disrupting to the flow of reading.  Some information is repeated frequently throughout the book.  Examples are about the mayor’s housekeeper, the case, Ben’s wish to get a promotion, Ben wanting Keeley to stay out of the case, and information about Keeley’s mother.  These are just a few examples.  Do authors think readers are forgetful?  I will not be continuing with this series.  It is just not the right cozy mystery series for me.  The first book in A Keeley Carpenter Mystery series is Downward Facing Death.

I appreciate you visiting. I am currently reading An Uncommon Protector by Shelley Shepard Gray.  I will return tomorrow to review another novel. I hope you have a comforting night.  Take care and Happy Reading!