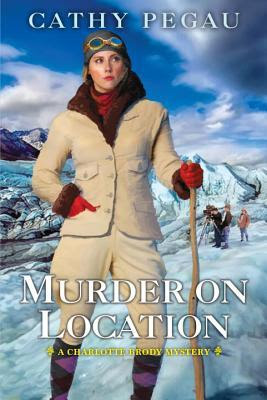 Welcome!  Since it was raining yesterday, I have to go out and run errands today.  I am not allowed to drive in the rain.  My father always said that he would prefer that the car and I arrive home in one piece and that is better accomplished when the roads are not slick.  It was his way of stating I do not drive well in wet weather (which is true).

Murder on Location by Cathy Pegau is the third book in A Charlotte Brody Mystery series.  Charlotte Brody is out on a cold day in mid-march to watch the arrival of the film crew and actors from California to Cordova.  Charlotte’s boss, Andrew Tolliver assigned her to cover the event.  They are going to be in the area for two weeks for the filming of North to Fortune and Charlotte will be reporting all of it for Cordova Daily Times.  It seems, though, that not everyone is happy with their arrival.  The Alaskan Natives are not happy with how they are being portrayed in the film and the members of the Alaska Eyak Council are out in protest.  Wallace Meade, the producer, agrees to hire locals to act in the film.  One of the citizens chosen is Becca Derenov, Charlotte’s ward.  Charlotte and Becca pack up and head out with the crew to Childs Glacier for location filming.  The next morning everyone is waiting for Stanley Welsh, the director, to show up.  When he is not located within the camp, the group fans out to search for him.  Welsh is found down in a crevasse.  It is assumed that the medicine he takes made him disoriented and he fell into the crevasse during the night.  Charlotte is not sure the solution is so straightforward.  She sends Becca to town for Deputy James Eddington (also her beau) and Charlotte’s brother, Dr. Michael Brody (who acts as coroner).  After the group returns to town, the crews rooms are ransacked and a threatening note left behind. It turns out that this is not the first incident this cast and crew has experienced.  Charlotte is determined to get answers before the cast and crew returns to California--and the killer with them.

I thought Murder on Location was nicely written and it had a good flow or pace.  It is a little slow in the beginning, but picks up pace after the murder occurs.  This is the third installment in the series, but Murder on Location can be read alone.  There is some information about Charlotte’s past that is not completely explained in this edition (why she is afraid to be intimate with James Eddington).  Unlike other cozy mysteries, Murder on Location contains foul language (mild words) and intimate situations.  There is even a discussion between Charlotte and the local madam on how to prevent pregnancy. I give Murder on Location 3 out of 5 stars.   I felt that the characters lacked depth.  The author did not provide details on the characters added in this story.  We just get the basics on them (like they are actors from California).  The mystery was not complicated (unfortunately).  It was obvious which character would be bumped off.   I want a complicated, twisty mystery that will mystify me.  I do not wish to be able to identify the killer before I am halfway through the book.  There is a little extra something at the end that might surprise some readers.  Avid mystery fans will figure it out before the reveal (especially if you have read Agatha Christie’s books).  There is, of course, the requisite romance in the novel between Charlotte and James Eddington.  Charlotte has to decide if she wants to take their relationship to the next level.  I would have preferred if the author had let the romance play out a little longer in a more traditional manner.  I would have liked to see James and Charlotte go out on dates and get to know each other (and then maybe get married) slowly throughout the series.  I think it would have fit better with the time period.  I was never drawn into Murder on Location.  It is a nice book to read, but I was not fully engaged in it.  It is the type of book I can read while watching a television show.  The first two books in A Charlotte Brody Mystery series are Murder on the Last Frontier and Borrowing Death.  Murder on Location will be out on Tuesday, February 28.

I hope you enjoyed my review.  I am currently reading Everything Belongs to Us by Yoojin Grace Wuertz.  I will see you when I return on Friday with another one of my book critiques.    Take care and Happy Reading!

Posted by Kris Anderson, The Avid Reader at 10:00 AM