A Measure of Murder: A Sally Solari Mystery 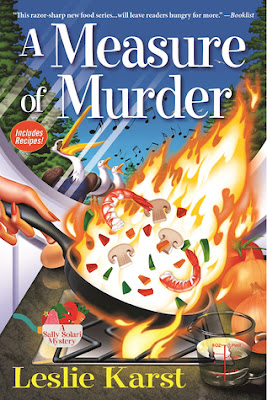 Happy Sunday!  I hope everyone has enjoyed a relaxing day.  Have you discovered Karen MacInerney's The Gray Whale Inn Mysteries?  There are seven books in the series at this time.  I am currently reading the latest novel Whale of a Crime (I have been trying to get to this book for the last month).  The books in the series are easy to read, great characters, and have good mysteries.


A Measure of Murder by Leslie Karst is the second book in A Sally Solari Mystery series.   Sally Solari owns Gauguin, a restaurant that she inherited from her aunt.  Sally is also still managing the family restaurant, Solari’s (but she is training someone to take over her duties).  But when Sally hears that the Santa Cruz Community Chorus is going to be perform Mozart Requiem (with a newly discovered piece written by Sussmayr), she knows she has to audition.  Sally has wanted to do this musical piece since high school.  Sally is accepted into the choir and it will be an intense three weeks of rehearsals (three a week).  At the first rehearsal, just after the intermission, a woman bursts into the church where they practice.  The woman has found a man hurt in the courtyard.  Everyone runs out, but it is too late.  The dead man is Kyle, the cantankerous section leader of the tenors.  The police rule it an accident, but Sally is not convinced.  It turns out that Kyle’s girlfriend, Jill, is of a similar mind.  Jill asks Sally to look into Kyle’s death (Sally’s reputation proceeds her).  Sally starts digging around, but the investigation is fraught with danger.  Will Sally be able to uncover the truth or end up in hot water?

A Measure of Murder is a very busy book.  I am not sure how Sally managed to get all her tasks accomplished.  Sally was working at Solari’s and Gauguin, learning to cook on the line at Gauguin, working on the new fall menu for Gauguin (and all that it entails), rehearsals for the choir, investigating the murder, watching the Tour de France, having drinks with friends, information on Mozart Requiem and cycling.  Normally running one restaurant is a time-consuming endeavor.  There is just no way that one person could do all these tasks and find time to sleep.  I was tired just reading about all her activities.  These various tasks slowed down the pace of the book.  I hope the author cuts back on Sally’s activities in future books in the series (to make it more believable).  There are many characters in A Measure of Murder and it can be confusing (especially in the first part of the book).  There are the restaurant workers, the chorus, ex-boyfriend, best friend, and people Sally questions as part of her investigation.   I liked the mystery that the author crafted, but I was able to puzzle out the killer before I was halfway through the novel.  If you do not read a lot of mysteries, the killer may come as a surprise.  I give A Measure of Murder 3 out of 5 stars.  While A Measure of Murder is the second book in the series, it can be read as a stand-alone.  The author provides information from the first novel and background details on Sally.  I wished the author had put the murder in the forefront of A Measure of Murder.  It took a backseat (maybe even further back than the backseat) to everything else going on in the book (especially the chorus).  I preferred Dying for a Taste (first book in the series) more than A Measure of Murder.  Dying for a Taste is currently available for $1.99 (Kindle version on Amazon).

I am taking the night off from cooking (hooray)!  I have a pizza on the way (yum).  May all of you have a good night.  I will be back tomorrow with another book review.  Take care and Happy Reading!