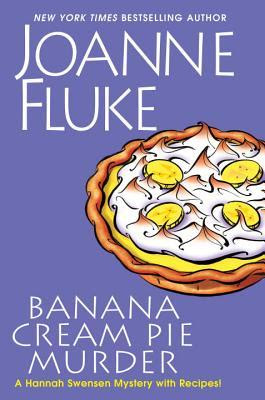 Happy Friday!  Can you believe it is the last Friday of February? The month is almost over and Lent begins next Wednesday.  There are several new books releasing on Tuesday, February 28.  Some of the titles are Fatality by Firelight by Lynn Cahoon, Death by Chocolate Lab by Bethany Blake, Murder on Location by Cathy Pegau, Kneaded to Death by Winnie Archer, Murder at an Irish Wedding by Carlene O'Connor, Treasured Grace by Tracie Peterson, Annie's Recipe by Lisa Jones Baker, and More Than a Marriage by Amy Lillard.  I have reviewed a couple of these titles already and I will review more in the coming days.

Banana Cream Pie Murder by Joanne Fluke is the twenty-first book in A Hannah Swensen Mystery series.  Hannah Swensen is enjoying a honeymoon cruise with her new husband, Ross Barton.  It is the last night of the voyage when they receive a message from Delores Swensen, Hannah’s mother.  Delores found the body of her downstairs neighbor, Victoria “Tori” Bascomb and she wants Hannah to return home right away (to investigate).  Tori Bascomb is the sister of Lake Eden’s mayor, Richard Bascomb.  Tori was a retired actress who settled in Lake Eden and provides private acting lessons.  Tori also directs the Lake Eden Players and teaches drama at Jordan High School.  Hannah and Ross return home the next day and find the whole family waiting for them at Hannah’s condo.  As a wedding gift, Hannah’s condo has been completely redecorated (except the kitchen for which Hannah is very grateful).  The following day Hannah is ready to get updated on the case and to start sleuthing.  Tori was not a well-liked woman which leads to a long suspect list.  Hannah is busy questioning suspects and looking into Tori’s movements on the day of her death.  Hannah also has to adjust to having a husband.  Hannah is used to making her own decisions, but now she must consider Ross (and consult him).  When Hannah gets a little too close, the killer strikes back.  Join Hannah along with her family and friends in her latest adventure in Banana Cream Pie Murder.

I thought that Banana Cream Pie Murder had a good pace which makes it an easy and quick novel to read.  Hannah is not her usual confident, independent self in this book.  Hannah is used to making her own decisions and living independently.  She now has another person to consider.  Hannah and Ross rushed into marriage and they never discussed what happens after they are married (like does Ross want children or does he mind Michelle staying in the guest room). Mike and Norman know more about Hannah than Ross (like how Hannah dislikes sweeping).  I did not feel any chemistry between Ross and Hannah.  I did not like how Hannah is portrayed as technologically incompetent.  She cannot figure out how to use her phone (change ringer, get her messages, etc.).  Another un-Hannah moment is when Hannah is shopping for pale for a beer muffin recipe.  Hannah has never purchased lager previously.  I would expect Hannah to figure it out on her own (that she just needs to look at the labels) or ask someone in the store.  Instead, she is blindly picking out different beers. Hannah has never been helpless or a dimwit.  Hannah does little cooking or baking in Banana Cream Pie Murder.  Michelle, Hannah’s sister, is in town and has taken over breakfast (and the majority of the baking in this book).  Michelle is the more self-possessed sister in this story (especially since Andrea is MIA).  I give Banana Cream Pie Murder 3 out of 5 stars (I am being a little generous with the rating).  Banana Cream Pie Murder was more cozy than mystery.  Every chapter revolved around the baking, making, or eating of food with recipes at the end of the chapter (which interrupts the flow).  There are twenty-one recipes in Banana Cream Pie Murder.  The murder investigation does not ramp up until a reader is about 70% of the way through the novel.  That is when the author starts introducing the suspects.  It does not take much brain power to identify the guilty party.  I kept hoping for a nice twist that would pin the murder on the mayor’s wife (this is not a spoiler).  One thing that really bugged me was Ross calling Hannah--Cookie.  I do not believe that Ross ever called Hannah by her given name.  It is cute that he gave her a nickname in college, but does he have to use it all the time.  I can see using it when they are alone, but not out in public (I found it annoying).  Banana Cream Pie Murder seemed to be written by someone other than Joanne Fluke.  Banana Cream Pie Murder is nothing like the earlier books in the series.  I did not appreciate the cliffhanger ending.  I am hoping that the person involved (spoiler) will get bumped off (a girl can dream).  Because of the cliffhanger, I will be reading the next book in A Hannah Swensen Mystery series.  If you have not read any of the books in this series, I do not recommend starting with Banana Cream Pie Murder.  I suggest you read the earlier books in the series (which I really enjoyed).

I appreciate you taking the time to read my lengthy review (I got on a little bit of a rant).  May each of you have an enjoyable Friday. Take care and Happy Reading!