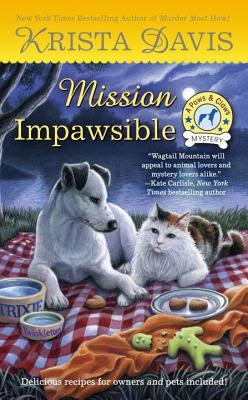 Greetings, fellow readers!  I hope you have had a delightful Wednesday. I spent most of the day on the road. My doctor is an hour and a half away from my house.  A three hour drive for a five minute appointment! The one benefit is listening to an audio book. It helps to pass the time (plus I cannot imagine going three hours without a book)!


Mission Impawsible by Krista Davis is the fourth book in A Paws and Claws Mystery series.  Holly Miller and Liesel Miller, her grandmother, co-own the Sugar Maple Inn in Wagtail, Virginia.  The inn is fully booked this weekend for their Animal Attraction Matchmaking event.  Liesel (Holly calls her Oma) has hired Macon Stotts, a professional matchmaker, to pair up participants.  Holly is waiting for their last guest, Gustav Vogel to show up.  When Gustav fails to arrive by check in, Holly lets to the room to two nervous mothers who have come to spy on their daughters (they want to make sure the girls are not matched with inappropriate men).  Holly then goes off to walk the dogs and meets up with John Adele and his dog, Cooper.  They decide to get a drink at The Alley Cat bar in the Shire.  They are walking along when Holly hears Trixie barking.  Holly knows that bark.  Trixie has stumbled upon man on the ground (the dead as a doornail type).  A letter in his pocket is addressed to Gustav Vogel.  It looks like they have found the missing guest, and he will not be needing a room.  Later the next morning, Holly is shocked when a gentleman with a German accent introduces himself as Gustav Vogel.  Gustav had been mugged the previous day and ended up in the hospital.  The deceased gentleman (using this term loosely) is Dr. Randall Donovan, a psychiatrist who had an extreme dislike for Macon.  The weekend takes a turn for the worse when Trixie and Holly end up finding another body in Zelda’s backyard.  It is Zelda’s ex-husband, Hank who has been stalking her all weekend.  This time Holly ends up on the suspect list.  Can Holly find the guilty party before she gets carted off by Officer Dave?

I thoroughly enjoyed reading Mission Impawsible.   It is always a pleasure to return the town of Wagtail. I found the novel to be well-written and have a good pace (or flow).  I thought that there was just the right amount of humor and fun in Mission Impawsible.  The characters are delightful.  I appreciate the various personalities Ms. Davis created for this fictional town.  She put together an eclectic mix that somehow all works together (Nessie and Sky will have you in stitches along with Huey).  I wish the town of Wagtail was real.  A town that caters to people and their animal friends (they do not discriminate).  My dogs and cats would love to visit this animal paradise (actually, so would I).  I thought the author crafted a well-rounded and challenging mystery.  Most readers will have difficulty identifying the killer prior to the reveal (you need to pay very careful attention to the clues).  I give Mission Impawsible 5 out of 5 stars.  My only criticism is about Ben.  Ben is Holly’s ex-boyfriend and a royal pain in the you know what.  He shows up uninvited and expects to stay in Holly’s guest room.  He then signs up for a dog and spends little time with it.  He expects Holly to look after the sweet fellow.  Ben is very vanilla.  I hope we experience less of him in future novels.  I have read all the books in A Paws and Claws Mystery series (in order), but a reader could pick up and read the books in any order.  There is only one downfall with reading Mission Impawsible. You have finished it and now must wait so very long until the next book in A Paws and Claws Mystery series come out!

The other novels in A Paws and Claws Mystery series are Murder, She Barked, The Ghost and Mrs. Mewer, and Murder Most Howl. I am off to rest.  I had to get up four hours early in order to make my appointment (I am ready to fall asleep).  Thank you for your visit and I hope you have a special night.  I will return tomorrow with another new book critique.  Take care and Happy Reading!