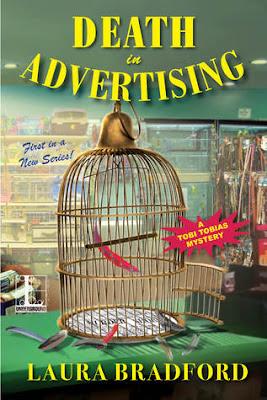 Welcome!  Thank you for joining me today.  I spent the day once again wrestling with computer issues and keeping an eye on my mother (both tasks are frustrating).  My mother has good days and bad days.  Today is one of the bad days.  I have to constantly check on her (you would not believe some of the places where I have found her sound asleep).

Death in Advertising by Laura Bradford is the first book in A Tobi Tobias Mystery series.  Tobi Tobias started her own advertising agency in St. Louis and called it Tobias Ad Agency.  If she does not get a new client soon, though, she need to close up shop.  Tobi is even working at the local pet store to help supplement her income (I am curious how she pays for the receptionist).  Tobi gets her miracle when Andrew and Gary Zander walk into her office.  They own and run the Zander Closet Company.  They need a catchy slogan for a radio campaign that begins three days.  Tobi comes up with the perfect slogan and it is an instant hit.  The radio spot ties in with the Annual Home Showcase Weekend in Chesterfield.  The Zander Closet Company has installed a premium closet system into Preston and Mitzi Hohlbrook’s house (they are a part of the tour).  They are going to take photographs of the closet system for the website and new pamphlets.  Andrew is opening a special compartment to show Tobi when Preston Hohlbrook falls out.   Someone took Tobi’s slogan literally.  The press have a field day using Tobi’s slogan, and Tobi’s agency is now persona non-grata.  Tobi starts investigating the murder so she can clear her agencies name (or she will no longer have an agency).  It is not going to be easy since the only witness to the crime is Baboo, Preston’s African grey parrot.  Tobi needs to work quickly before the wrongdoer flies away (I just had to do it)!

Death in Advertising is easy to read and has some interesting characters.  I found the book to be more cozy than mystery.  The book focused on Tobi and her life (written in the first person).  I felt the author put too many quirky characters into the book.  It felt like we were introduced to all of Tobi’s neighbors (and anyone she meets while walking to work) and their pets.  There is, of course, the requisite annoying neighbor (seems to be a common attribute in books I have read recently). I did like Grandpa Stu and Tobi’s neighbor, Carter (I thought he was entertaining).  I give Death in Advertising 3 out of 5 stars.  The mystery was not the main focus of the book.  I believe more time was devoted to Tobi eating her cocoa puffs cereal (she should buy it in bulk) than the murder.  There are one or two clues early in the book, but the main hints are right before the reveal.  I did appreciate the authors use of misdirection.  The mystery can be solved before the reveal (do not fall for the diversion).  I wish there had been less time devoted to Tobi’s thinking (or spacing out in front of people) and her interest in Andrew as a romantic prospect.  One scene had Tobi more interested in a rogue chocolate chip than the questioning of the suspect (I wanted to yell at her to just ask for some chips from the cook instead of trying to swipe the lone chip that fell on the counter).  Death in Advertising is just not the right book for me (I prefer the mystery to be more prevalent).  I do, though, recommend Laura Bradford's An Amish Mystery series and Southern Sewing Circle Mysteries (under the pen name Elizabeth Lynn Casey).

I am currently reading Death and the Gravedigger's Angel by Loretta Ross (I am still behind on my reading).  I will be back tomorrow to review another newly released novel.  Take care and Happy Reading!