Betty Church and the Suffolk Vampire 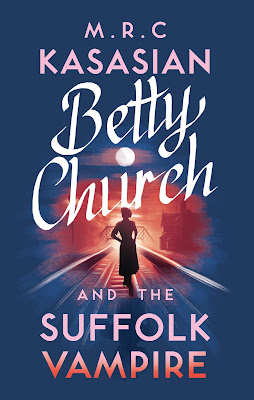 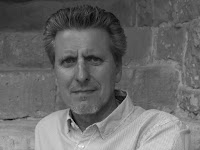 Good Day!  M.R.C. Kasasian was raised in Lancashire.  He has had varied jobs that include wine watier, veterinary assistant, factory hand, fairground worker, and dentist.  In the summer, the author and his wife life in Suffolk while they winter in Malta.  You can find M.R.C. Kasasian on Twitter @MRCKasasian.

Betty Church and the Suffolk Vampire by M.R.C. Kasasian starts in 1939.  Betty Church was injured on the job and, if not for the assistance of her godmother, March Middleton, she would have been off the force.  Instead, Betty gets a promotion (she is now an inspector) and transferred from London back to her hometown of Sackwater (the last place Betty would like to return to).  Life moves at a slower pace in Sackwater and the officers at the Sackwater Central Police Station are lacking (let’s face it—it’s a dumping ground).  Things get off to a roaring start when she arrives at the station to encounter a sleeping front desk officer, Frank Briggs, who distinctly resembles a corpse (creepy).  Betty than proceeds to her parent’s home where she is told there is no room since they are taking in some East End refugees as part of a trial program (in other words, they are getting paid to do it).  Betty has not been at her new posting long when Constable Dodo Chivers arrives a week early for her new position.  Betty and Dodo go to check on Mr. Peatrie and find him dead at the bottom of his stairs.  They notice two strange marks on his neck and Dodo is sure that a vampire has attacked him.  This is just the beginning of the killing spree and the press dub the killer the “Suffolk Vampire”.  Betty must calm down the locals who are taking precautions (the town has run out of garlic) while tracking down a dangerous murderer.

Betty Church and the Suffolk Vampire is well-written and a humorous novel.  This is the type of book that my mother just loves (she laughed continually while reading it).  Betty is a strong, intelligent resourceful woman who is not afraid of hard work and has the patience of Job.  The townspeople and Betty’s co-workers are quirky (to put it mildly).  Dodo Chivers is a unique personality who seamlessly fits into the Church household and wins the affections of Betty’s parents (they treat her better than Betty).  The author managed to combine an amusing plot with dastardly deeds.  M.R.C. Kasasian created imaginative characters that challenge Betty.  I like how the author incorporated the rules from the time-period for female officers into the story (they could not work at night so as not to incite the desires of the male officers) as well as the attitudes of the male officers (misogynists).  I like the authors descriptive writing style.  The details help bring the scenes alive for me.  Betty Church and the Suffolk Vampire was a little over-the-top for my tastes.  I thought the pace was a little slow and there was too much of Dodo (she is an acquired taste).  Betty Church and the Suffolk Vampire is British cozy mystery that will have you in stitches.  It is an unforgettable novel.

I have included an excerpt of Betty Church and the Suffolk Vampire:


March Middleton gave her impressions of her first visit to Gower Street in her journal of 1882 and surprisingly little had changed in that time. The hexagonal red-brick hospital still sprouted its turrets to the right. The University College, white and colonnaded like a Greek temple, stood set back on the opposite side of the road, still paved with wooden blocks for quietness though the traffic was more rubber-wheeled than iron-shoed by now. There was, however, still a good sprinkling of horse-drawn carts. The milkman and the coal merchant had no reason to invest in the internal combustion engine.

The people were dressed differently – not a man in spats nor a top hat to be seen and the women showing enough leg to have made Sidney Grice apoplectic. Gower Street was already all too familiar to me. It had formed part of my Bloomsbury beat when I was a constable and I had made my first arrest on the corner with Cable Street – an unemployed cooper for beating his wife with a cudgel. He had pleaded guilty but, much to my disgust, after hearing what a sharp tongue the woman had, the magistrate had merely bound him over to keep the peace while his wife with a broken jaw and nose was admonished to show more restraint in her language.  Number 125 stood four stories high near the end of a Georgian terrace and I saw, as I went up four of the six steps to pull on the bell, that the heavy curtains to the right of the black front door were drawn. I once asked March Middleton why she had never mentioned the lions’ heads on the doorposts and she had explained that she had not noticed them the first time she visited but, if she had mentioned them in later journals, it would have only drawn attention to her poor skills of observation, something Mr. Grice was overly fond of doing already.

The first time I had been there after getting my helmet with its famous Brunswick star, Mr. Grice’s old maid had met me with, ‘I’m supposed to tell visitors to wipe their feet but I ’spect yours is clean so you can just wipe your boots, Constabell.’ At which she clapped her hand over her mouth and came out with a muffled, ‘Oh my gawd you’re a woman – but I suppositate you know that.’ ‘It’s me, Molly.’  ‘Everyone is me to themself,’ she had declared wisely, ‘expect me. I’m just Molly.’ This time I waited a good two minutes and was just about to tug on the round brass handle again when I heard three bolts being drawn back and was greeted by a woman, about my age I guessed, in a plain black dress with a crisp white apron.

‘Oh, come in,’ she said resignedly, as if I had been pestering her all week for admission. ‘I recognize you from your photograph. I’m Jenny.’ She ushered me in, shut the door and took my coat. ‘Hello, Jenny.’ I didn’t tell her that Mr. G would have blown a gasket at the familiarity of a servant introducing herself. Jenny was tall. I am well above average at five feet nine and she had a good couple of inches on me; but I was inclined to think she was cheating. Her neck alone gave her an unfair advantage. It rose from her collar like the middle section of a boa constrictor.  ‘I thought you might be in uniform.’ There was something disapproving in the way she told me that. Her nostrils were upturned and her lips thin and I half-expected to see a forked tongue flicking out.

Jenny hung my coat next to the great personal detective’s old Ulster coat, which was still on its end hook near a stand of his famous walking canes. Sidney Grice had temporarily blinded himself when his gun stick backfired once, and he had stabbed an aristocrat in the foot with his spike stick in Kew one afternoon. I had often wondered which was his swordstick and which one played confusing tunes for they all looked identical to me. But, after nearly starting a blaze with his flame stick, I had been forbidden to touch any of them again and it did not seem right to do so now. I placed my hat on the table alongside seven of March Middleton’s laid out, like a milliner’s display, in a row.

‘I’m off duty.’ I was certainly not going to tell her that I might never be on it again.  ‘Oh.’ This didn’t seem to be a satisfactory explanation until I raised my sleeve. The maid’s head snaked down to inspect this discovery but, finding nothing worth swallowing, reluctantly coiled back. ‘How did you do that?’ ‘I didn’t. Is Miss Middlet—’ ‘Through there,’ Jenny broke in with a tip of her head, though that was not going to be my question.  Through there was a site almost sacred in the annals of criminology – Sidney Grice’s legendary study and consulting room. Jenny opened the door and I stepped quietly in. The room was quite dark, for it was still lit by gas, and the mantles were turned low, so it was a while before my eyes adjusted enough to make out the form of my godmother. ‘Hello, Betty,’ March Middleton greeted me from her armchair to the left of a flickering coal fire.

Betty Church and the Suffolk Vampire is available on Amazon. Thank you for stopping by today.  Please take the opportunity to visit the other stops on the Betty Church and the Suffolk Vampire Tour (see schedule below).  I will be sharing my thoughts on Murder in Greenwich Village by Liz Freeland tomorrow.  It is the first novel in A Louise Falk Mystery series.  Keep cool and Happy Reading! 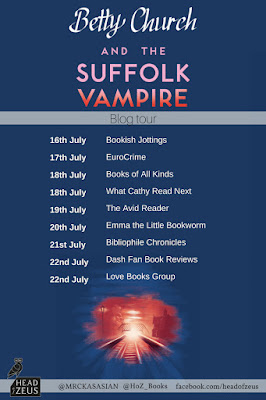