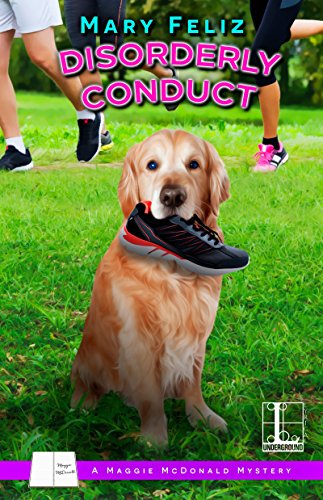 Mary Feliz writes the Maggie McDonald Mysteries featuring a Silicon Valley professional organizer and her sidekick golden retriever. She’s worked for Fortune 500 firms and mom and pop enterprises competed in whaleboat races and done synchronized swimming. She attends organizing conferences in her character’s stead, but Maggie’s skills leave her in the dust.

Disorderly Conduct by Mary Feliz is the fourth installment in A Maggie McDonald Mystery series.  Devastating wild fires are ravaging through the hills above Silicon Valley close to where Maggie McDonald and her family live on their farm.  They are preparing to evacuate when Maggie receives a call from her best friend, Tess Olmos.  Tess’s husband, Patrick had not been in touch which is not unusual (he gets caught up in his work).  But, then she is contacted by the police stating they believe they found her husband in the hills and they need her identify the body.  Tess and her son, Teddy are devastated by the news and have trouble believing Patrick’s death was accidental.  They soon discover that Patrick was murdered when the police arrive to search her home and arrest Tess.  The evidence the police find in Tess’s house seals her fate. Maggie needs to sort through the clues and question the suspects to pinpoint Patrick’s killer before Teddy loses both of his parents.

I found Disorderly Conduct to be nicely written and to have a quick pace.  The mystery becomes complex when it is discovered that criminals are growing marijuana illegally on the public land in the hills above their farm.  It happened to be where Patrick ran frequently.  However, the mystery takes up a small portion of the book.  I wish the author had made Patrick’s murder the focus.  The story talks about the fires that are ravaging through the Santa Cruz mountains destroying the vegetation and forcing wildlife along with humans to flee.  There are helpful tips at the beginning of each chapter on how people can prepare for emergencies (fires, hurricanes).  The items we should have available in our home and car along with planning where you would go.  It is important to remember your pets in your plans.  There are great characters in A Maggie McDonald Mystery series.  Maggie is a smart, strong woman who can handle any situation thrown at her and she is very organized.  The kids and the animals add humor to the story (and it makes me very happy that I had a daughter instead of a son).  The various families are close and help each other in times of crisis (like Tess taking in the McDonald family).  While Disorderly Conduct could be read alone, I recommend reading Address to Die For first.  Disorderly Conduct addresses some tough topics in a different way.  Return to Orchard View and join Maggie as she sets out to catch a murderer and save her best friend in Disorderly Conduct.

Disorderly Conduct is available for sale at Amazon, Barnes & Noble, Kobo, and GooglePlay.  The other three novels in A Maggie McDonald Mystery series are Address to Die For, Scheduled to Death, and Dead Storage.  Thank you for stopping by today and reading my review.  I will be doing a spotlight on Tied Up with Strings by Madeline McEwen tomorrow.  The first book in A Serebral Seniors Mystery series. Take care, stay cool and Happy Reading!

July 21 – Escape With Dollycas Into A Good Book – SPOTLIGHT