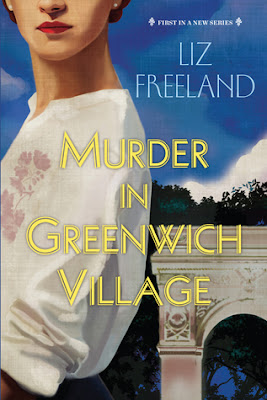 Felicitations! Paradox by Catherine Coulter comes out on July 31 along with Death Over Easy by Maddie Day, Last Call by Allyson K. Abbott, and Poppy Harmon Investigates by Lee Hollis.  Believe Me by J.P. Delaney releases on July 24.

Murder in Greenwich Village by Liz Freeland is the first book in A Louise Faulk Mystery series.  We venture back to 1913 in New York City.  Louise Faulk arrived in New York six months prior and, with the help of her Aunt Irene, she has a job at Van Hooten & McChesney.  Her aunt, Irene Livingston Green is an author who hosts interesting gatherings every Thursday evening. Louise meets author, Ford Fitzsimmons whose manuscript she recently read and recommended to her boss.  She would like to read more of Ford’s work as well as get to know him better and provides him with her home address.  After the party, Louise and her roommate, Callie head home and encounter Callie’s married boyfriend, Sawyer Attinger along the way.  Callie is a beautiful woman who works as a mannequin at Solomon’s and is an aspiring Broadway actress.  Callie enters her bedroom where her cousin, Ethel has been staying for the last month and lets out a scream.  Ethel is facedown on the bed in Callie’s negligee with a butcher’s knife in her back.  Detective Muldoon and Detective Robinson are on the case.  The next morning, Louise is surprised when an old friend from back home arrives and is promptly arrested as the killer.  Louise knows Otto would not harm a soul and, after some encouragement from Aunt Irene, she delves into the case. Louise finds herself discovering new parts of the city as she checks out her suspects and discovers that everyone has secrets including herself.

Murder in Greenwich Village is different from other cozy mysteries as it is set in 1913.  Louise Faulk is a perky main character who is hiding a secret.  I did not like her secret and wish it had not been included in the book.  She is passionate about clearing the wrong people accused of the crime, but she lacks subtly. Louise’s questions come across as accusations offending people.  While the author was trying to make the mystery complicated, it ended up being convoluted with too many people involved.  There are several red herrings, but they do not detract from identifying the guilty party (it was a cinch). Louise running around the city reminds me of busy work in school (the substitute teacher would give students).   It would have been nice if the author had worked to develop the characters (fleshed them out) and eliminate some of the wacky ones (did we need the smarmy son of the landlord and the noisy musicians).  There is repetition of information, endless speculation and the book has a slow pace.  Murder in Greenwich Village has potential.  I am curious to see if Louise will join the police force, and I like the potential romance between Louise and Detective Muldoon.  My rating for Murder in Greenwich Village 3 out of 5 stars.  For readers who prefer light, historical cozy mysteries, pick up Murder in Greenwich Village to see how Louise fares in solving Ethel’s murder.


Murder in Midtown is the next book in A Louise Faulk Mystery series and it will be out on March 26, 2019. I appreciate you visiting and reading my thoughts on this novel.  Tomorrow I will be reviewing Amish Celebrations by Beth Wiseman. Take care and Happy Reading! 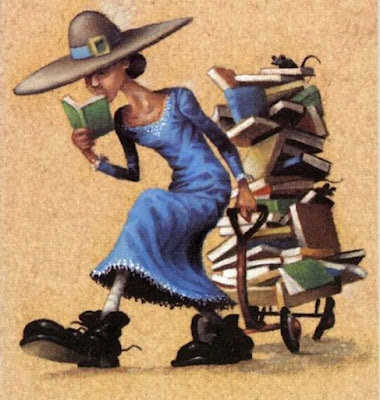