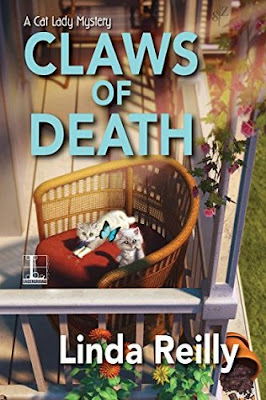 Good Day!  I hope everyone is having a relaxing weekend.  I am busy preparing for my mother's birthday tomorrow.  I want to make sure she has a very special day.  Cottage by the Sea by Debbie Macomber comes out on July 17.  Murder, She Reported by Peg Cochran will be released on July 31 along with Death Over Easy by Maddie Day.

Claws of Death by Linda Reilly is the second A Cat Lady Mystery.  Deanna Daltry, the actress, is coming to Whisker Jog, New Hampshire and she wishes to adopt a cat to keep her company in her newly renovated mansion.  When Deanna shows up for her appointment at Lara Caphart’s High Cliff Shelter for Cats she falls in love with two adorable kittens. The next day at the Ladies Association Welcome Tea and Reception for Deanna, someone puts worms in Deanna’s purse and then leaves a threatening message on her car.  It seems Deanna’s antics from her youth are coming back to haunt her.  When Lara and Aunt Fran drop off the kittens at Deanna’s home, Lara, thanks to Blue, spots a person slumped against a tombstone in the graveyard.  They rush to the graveyard, but it is too late to save Donald Waitt.  Deanna dated Don in high school and had not spoken to him until the day before at the tea.  Deanna requests that Lara use her sleuthing skills to find Don’s murderer.  With the help of Aunt Fran and the mysterious Blue, Lara sets out to trap a killer.

Claws of Death is a cute cozy mystery.  I found the book to be nicely written, have a good flow, just the right length and had steady pacing.  Claws of Death is set in animal friendly small town with caring residents (for the most part).  While Claws of Death is the second book in A Cat Lady Mystery series, it can be read alone.  I liked Blue, the Ragdoll ghost cat.  It added a mystical element that enhanced the story.  There are many delightful moments with cats.  As Lana and her newest employee take care of the animals at the shelter, adoption days, and the sweet little girl that comes to read to them.  There are lovely, relatable characters in ACat Lady Mystery series.  Lara and Aunt Fran who have turned their home into an animal shelter, Gideon who is Lara’s boyfriend and lawyer, Kayla Ramirez who is the newest employee of the shelter, and Chief Jerry Whitley who enforces the law for the town and is dating Fran.  Claws of Death is predominantly more cozy than mystery.  The murder is investigated but the animals and the personal relationships take precedence.  I thought the whodunit was simple, and I accurately identified the guilty party before Don was found in the graveyard.  The why and how are discovered later in the book.  I am giving Claws of Death 3 out of 5 stars.  Travel to Whisker Jog in Claws of Death to meet the friendly townspeople, the adorable felines, find out who is playing pranks on Deanna and discover who did away with Don. The first book in A Cat Lady Mystery series is Escape Claws and the third book which will be out on December 4 is Claws for Celebrations.

Thank you very much for visiting today.  Tomorrow I am featuring two books (it was an accident).  I am a part of the Great Escapes Tour for Airships, Crypts and Chocolate Chips by Erin Johnson.  There will be two giveaways available for readers to enter.  I will also be reviewing The Silver Ladies of London by Lesley Eames.  I hope that you have a calm day.  Take care and Happy Reading! 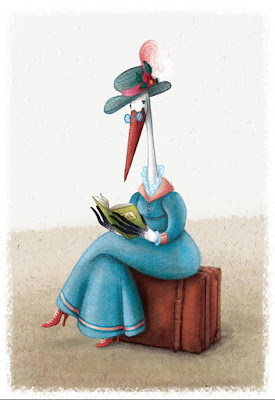