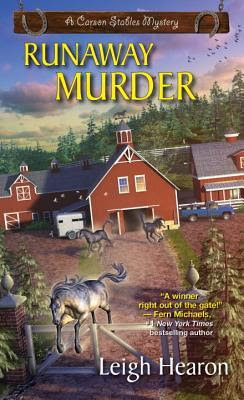 Greetings!  I hope everyone had a lovely weekend.  I am taking my mother to a doctor's appointment today (if she does not cancel again).  She reminds me of a little kid who is dreading going to the dentist or getting a shot.  I will have to bribe her with a treat (it does work).  Murder, She Reported by Peg Cochran comes out on July 31.  You do not want to miss this delightful new cozy mystery.

Runaway Murder by Leigh Hearon is the fourth book in A Carson Stables Mystery series.  Annie Carson has an opportunity to attend a dressage event in Southern California.  It will give Patricia Winters and Annie an opportunity to sell some of Hilda’s horses for Marcus Colbert.  After acquiring appropriate clothing with the help of her friends, Annie heads to the estate of Hollis and Miriam Darby where the dressage event is being held.  Annie and Patricia meet with potential buyer, Betsy Gilchrist and then head off for the evening cocktail hour.  Annie is enjoying her martini when an officer arrives to inform them that Ms. Gilchrist is dead. They will have to wait for the autopsy to see if foul play was involved.  Annie is introduced to the other guests who enjoy baiting each other with barbs.  Someone even steals one of the rider’s good luck beads.  The dressage event has barely begun when Judge Jean Bennett collapses.  Despite the medic’s quick arrival, she does not survive.  Annie deduces that Jean was poisoned and begins nosing around for the killer.  Are Betsy and Jean’s deaths connected?  Which of the guests disliked the victims enough to kill them?  Annie intends to find out in Runaway Murder.

Runaway Murder is my least favorite book in A Carson Stables Mystery series.  While it was nicely written, I found it dissatisfying.  Annie did not seem like herself in this installment.  She lacked friendliness and an open mind (at least in the beginning).  Her attitude towards dressage did a complete turnaround by the end of the novel.  Runaway Murder is dominated by horses and information about dressage (the pace was glacial).  It was interesting to learn the history behind dressage.  I wish, though, that the author had found a way to explain dressage in layman’s terms (like Laurien Berenson when she describes dog show events and judging).  The mystery took a backseat for the majority of the book.  In the latter half of the book, Annie starts taking an active role in searching for the killer.  However, by that time, I had already identified the guilty party (it was a cinch). Plus, I did not understand her working against the police and Annie removing evidence (which messes with the chain of custody). I did like the method of murder and how it was achieved (unique).  The maliciousness of the women got on my nerves after a couple of chapters (this was not a relaxing book).  I found the author’s word choices incongruous with the story.  It is not that I did not know the words and their meaning.  It is that they disrupted the flow of the story.  Some examples were quotidian, ersatz, contretemps, in situ, ebullient, and mien.  I wondered if the author had swallowed a dictionary or had a calendar where you learn a new word each day.  Annie had some romantic troubles with Marcus.  Personally, I do not know what Annie sees in Marcus.  The disagreements between them along with the women’s bickering was unpleasant. I do like that A Carson Stables Mystery series has a mature main character (she is 44), how they encourage rescuing unwanted horses, and I liked the addition of Chef Gustav.  Chef Gustav was a lively character and the best part of Runaway Murder.  If you are unfamiliar with the series, I recommend starting with Reining in Murder.

Thank you so much for stopping by today.  I will be sharing my thoughts on The Book of Peril by Melissa McShane tomorrow.  Wish me luck on my outing with my mother and I hope you have a spectacular day.  Take care and Happy Reading! 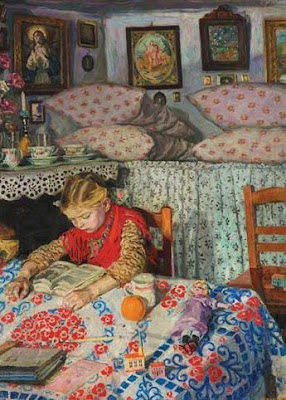