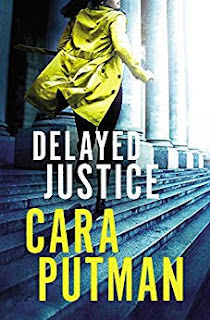 Genre: Legal Romantic Suspense
Release date: October 16, 2018
She had long given up the desire to be loved. Now she only needed to be heard.
Jaime Nichols went to law school to find the voice she never had as a child, and her determination to protect girls and women in the path of harm drives her in ways both spoken and unspoken. As Jamie, now a criminal defense attorney, prepares to press charges against someone who wronged her long ago, she must face not only her demons but also the unimaginable forces that protect the powerful man who tore her childhood apart.
Chandler Bolton, a retired veteran, is tasked with helping a young victim who must testify in court—and along with his therapy dog, Aslan, he’s up for the task. When he first meets Jaime, all brains, beauty, and brashness, he can’t help but be intrigued. As Chandler works to break through the wall Jaime has built around herself, the two of them discover that they may have more to offer one another than they ever could have guessed—and that together, they may be able to help this endangered child.
This thrilling installment of the Hidden Justice series explores the healing power of resolution and the weight of words given voice. And as Jaime pursues delayed justice of her own, she unearths eternal truths that will change the course of her life.

Since the time she could read Nancy Drew, Cara has wanted to write mysteries. In 2005 she attended a book signing at her local Christian bookstore. The rest, as they say, was history. There she met a fellow Indiana writer Colleen Coble. With prompting from her husband, Cara shared her dream with Colleen. Since those infamous words, Cara’s been writing award-winning books. She is currently working on book 30 and 31. Cara Putman is an active member of ACFW, and currently serves on its Executive Board. She has also been the Indiana ACFW chapter president and served as the Area Coordinator for Indiana.
Cara is also an attorney, lecturer at a Big Ten university, active in women’s ministry, and all around crazy woman. Crazy about God, her husband and her kids that is. She graduated with honors from the University of Nebraska-Lincoln (Go Huskers!) and George Mason Law School, and Krannert School of Management. You can learn more about Cara at www.caraputman.com

Delayed Justice was a hard story to write.  I’d known from Beyond Justice that Jaime had a hard story, but I wasn’t sure exactly what it was. She tried to hide from her past. She tried hard, but in the end it slowly spilled out. A young girl wounded deeply by someone who should protect her. And now as a professional young woman, Jaime is still fighting the shadows.  She believes she’s okay, or as okay as she’ll ever be.
Instead, she has to learn that there’s so much more waiting for her. Freedom from the chains of a past she didn’t choose. A love that will never end. And a God who has always loved her even when she questions His existence because of her past.
I think we’ve all lived that. There’s a place in our hearts that seems beyond His reach. For some of us, it’s a barrier to knowing Him. To others of us, it makes us question what we thought we knew about God. And for others of us, it presses us deeply into Him. Jaime’s book, Delayed Justice, explores this space. The space where some days we scream at the heavens Where are you, God? And the days we just curl into ourselves because life is too hard.
And in that space of shadow and light, God ultimately shines brightest. This is a truth that is slowly revealed through friends and The Lion, Witch, and the Wardrobe.

Delayed Justice by Cara Putman is the third book in the Hidden Justice Series.  Jaime Nichols is a public defender in Virginia.  It has been twenty years since her uncle, Dane Nichols abused her, and Jamie has decided it is the time to press charges against him.  The next day it is announced that Dane is up for a promotion to a one star general and Dane is not going to let Jaime ruin his career.  Dane is a powerful man with considerable influence.  Jaime will have to be strong to battle this formidable foe, so she can put the past to rest.

Chandler Bolton is a veteran who now works for the Department of Veteran Affairs helping veterans reacclimate to society.  Chandler has also had his dog, Aslan trained as a comfort dog to help abused children.  Tiffany Ange has been assaulted by her mother’s boyfriend and Aslan is just the help Tiffany needs to help tell her story to the police.  Chandler encounters Jaime in his apartment building one day and he is intrigued.  The two of them end up working together to help Tiffany testify against her abuser and recover from her horrible ordeal.  Can Chandler break through the wall Jaime has built around her heart?  Will Jaime be able to have a relationship after what she has experienced?  How will the case against Dane turn out?  Discover what happens in Delayed Justice.

The author did her research for Delayed Justice.  She captured the legal aspects of the judicial system and I like that we get to experience both sides (prosecution and defense).  It was interesting to learn about therapy/comfort dogs and how they assist victims. I found the court scenes to be realistic along with the situations with Tiffany and her mother.  Jaime is a wounded woman who has not gotten over what happened to her when she was eight years old.  She believes in the justice system and wants to help those who cannot afford a lawyer.  Jaime has been in therapy for years and feels she is now strong enough to handle the court battle.  She has the support of good friends from college who understand and are a part of the legal system.   The author did a remarkable job at handling a delicate and difficult subject. Chandler is a strong male character who is the hero of the story.  He comes across as a knight in shining armor protecting little Tiffany and Jaime.  I appreciated his Christian values and how he expressed them to Jaime.  Her journey towards Christ did not seem realistic.  It felt contrived and rushed.  The pace of Delayed Justice was slow which can be attributed to the detailed writing.  I recommend reading the Hidden Justice Series in order.  I had not read the previous two books and I felt like I was plopped into the middle of a book when I started reading Delayed Justice.  The book begins to make sense as I got further into it.  Jaime has complaints issued against her per her boss, but readers are not given any details (who issued them, what they were regarding).  The same thing happens when she receives an ethics violations (I wanted details).  Delayed Justice is a romantic suspense.  While I felt the romance, I did not feel the suspense.  I wanted to feel the scare, tension, and anxiety.  My rating for Delayed Justice is 3 out of 5 stars.  Fans of the Hidden Justice Series will not want to miss Delayed Justice to find out how Jaime's story plays out. The first two books in the Hidden Justice Series are Beyond Justice and Imperfect Justice. Delayed Justice will be out on October 16. 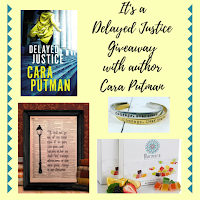 To celebrate her tour, Cara is giving away a grand prize package that includes a Courage Dear Heart bracelet, a The Lion, the Witch and the Wardrobe print, a copy of Delayed Justice, and a box of Turkish Delight!  Be sure to comment on the blog stops (schedule below) for nine extra entries into the giveaway. Click here to enter.  Good Luck!

Thank you for visiting The Avid Reader today.  I will be featuring Halloween Murder by Leslie Meier tomorrow.   I hope you have a peaceful day.  Take care and Happy Reading!