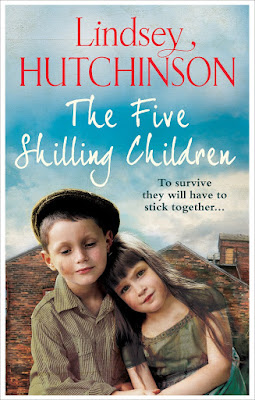 Welcome!  Lindsey Hutchinson was born and raised in Wednesbury, West Midlands, England.  She is married with two children and three grandchildren.  Lindsey lives in the Shropshire countryside with her husband and a Labrador.  Typing manuscripts for her mother, Meg Hutchinson rekindled Lindsey's love of storytelling and she followed in her mother's footsteps (destiny).  Lindsey enjoys photography, socialising with friends, and, of course, reading.  She also teaches an evening dance class and likes to take holidays in exotic places.  Her novels include The Workhouse Children, The Wives' Revenge, The Lost Sisters, The Orphan Girls, and The Girl on the Doorstep.  Lindsey Hutchinson is on Twitter (@LHutchAuthor) and Facebook (@LindseyHutchinson). 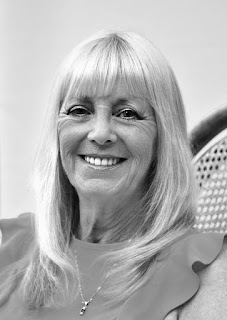 Tears and tribulations, laughs and heartbreak, from the queen of Black Country sagas.

Adam and Polly Fitch face a bleak future after being sold for just five shillings to Miss Reed's orphanage by their bullying father. Missing their mother Minnie, and their three brothers still at home, they know they must stick together to survive.
But the orphanage does have one advantage – a merry band of children who soon form their own kind of family – and they're all determined to escape the clutches of the wicked Miss Reed.
Adam decides to survive he'll need to fight, so he sneaks out to have boxing lessons with the famous pugilist Billy Marshall. Lessons he needs sooner than he expects when his beloved sister Polly is sold to the rich Bellamy family, and Adam decides to go to her rescue.
Can Adam, Polly and their band of friends survive life with only each other to rely on, and will they ever have the happily ever after they so long for... 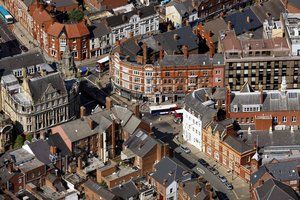 The Five Shilling Children by Lindsey Hutchinson takes to Wolverhampton in the heart of the Black Country.  Polly and Adam Fitch are sold to Reed’s Orphanage by their father for five shillings each.  They miss their mother (not their bully father), but they are thankful for a warm bed to sleep in each night plus hot meals to eat. They are especially grateful that they still have each other.  Adam has always been protective of Polly. The siblings become close friends with the other children at the orphanage.  The bond strengthens over time making this assortment of children a family.  When Una Reed sells Polly to a wealthy family, Adam escapes the orphanage with the help of the other kids to get his sister back.  The Five Shilling Children is a heart wrenching tale.  I like that the author gives us different perspectives:  the children, their mother, a nanny, and two ladies at the orphanage.  It is shocking what these children suffered at the hands of adults.  I was drawn into this emotional novel right away and I stayed up late to finish it.  I wanted to see what would happen to Adam, Polly and their makeshift family.  As the story evolves, we find out why Gerald Fitch went from a loving husband and father into an abusive man who drank through his earnings.  I enjoyed the various storylines in the book and how it all tied together.  The Five Shilling Children is my favorite book by Lindsey Hutchinson.  The love between Adam and Polly was strong and touching.  I loved how the kids came together and were loyal to each other.  It was so sweet that they never forgot to pray for help and guidance.  The Five Shilling Children is an emotional historic novel with a nasty nanny, a famine of funds, a supportive pugilist, a vile father, and hopeful children.
Excerpt

‘Oh for God’s sake Polly, stop yer snivelling!’ Minnie Fitch said looking down at her nine-year-old daughter. ‘I’ve got enough to do lookin’ after the babby, and you’re always crying!’

Minnie sighed heavily as she watched Polly run out of the back door of their two-up, two-down house in Bank Street, Wolverhampton. A moment later the steam train trundled past on the iron rails that ran alongside the row of houses. As it passed, it set the whole house rattling and when the whistle blew, the baby in her arms began to howl yet again. John was teething and had given his mother no peace during the night. 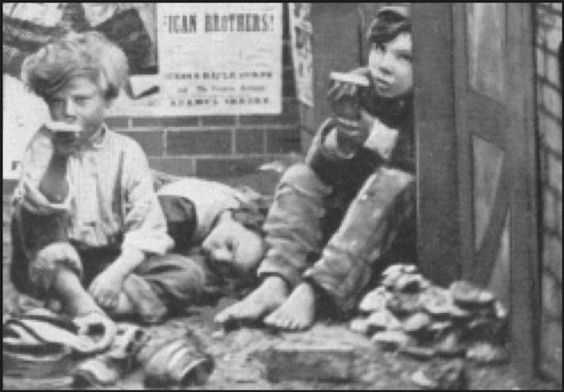 Dropping onto a wooden kitchen chair, Minnie cried along with him – out of pure exhaustion. Pushing her fair hair out of her face, she wiped her eyes on the corner of her apron.  ‘Mummy, I watched the train go past!’ Polly yelled as she came running back into the kitchen. Seeing her mother in tears, she stuck her fingers in her mouth and stood staring. In her young mind she wondered if she had been the cause of her mother’s weeping.

The London and North West Railway cut through the heart of the large industrial town of Wolverhampton in the Black Country, its steam trains thundering past the groups of houses day and night. Another train went past and everything shook again. Polly watched a cup jiggle along the edge of the table before dropping off the end and shattering into a hundred pieces. 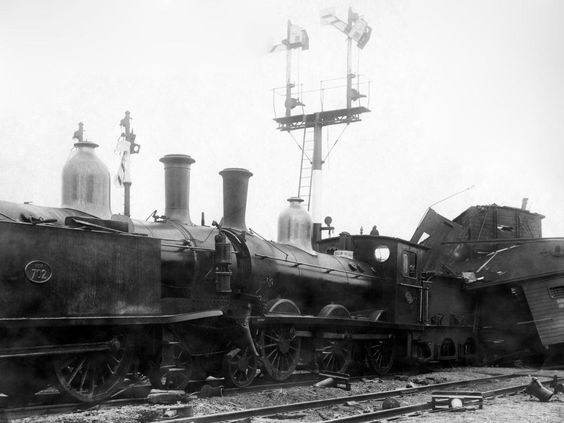 ‘Bloody trains!’ Minnie yelled, and Polly now knew what had upset her mother. She sighed a little breath of relief to know the tears were not down to her.  Wiping her snotty nose on her old cardigan sleeve, Polly shivered. ‘I’m cold,’ she mumbled through her wet fingers. Her bare feet were dirty as were her hands and face. Her cotton dress, almost a rag now, held no warmth. Brown eyes regarded the woman who began to yell at her, and hair so dark it was almost black fell about her face as her chin touched her chest.

‘Well go and get into bed then!’ Minnie shouted.  Polly shook her head saying nothing. She didn’t want to go to bed, it wasn’t night-time yet. She watched her mother close her eyes and squeeze them tight – the warning sign of a rising temper. As Minnie opened them again, Polly took to her heels. Unfortunately, she wasn’t quick enough and the slap bounced off the back of her head. 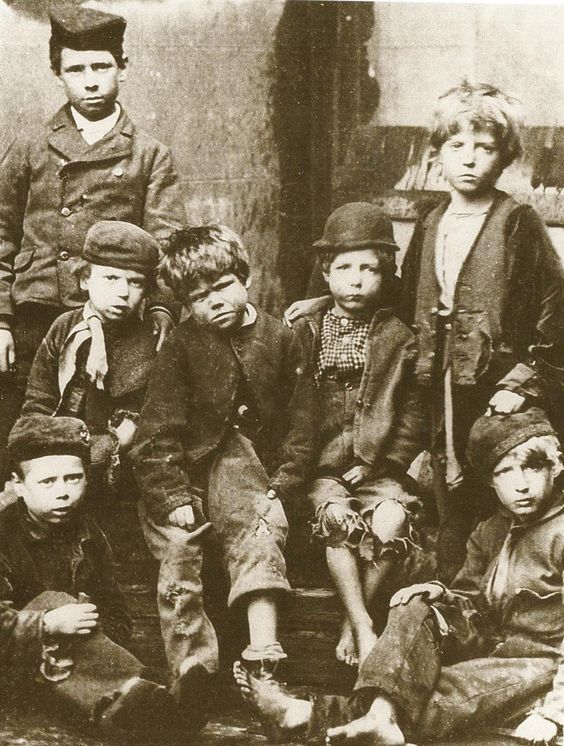 ‘Do as you’re bloody told! Minnie was in full swing now, chasing Polly into the living room, a screaming baby held on her hip. All her own tears forgotten, Minnie Fitch had had enough. Laying John in her husband’s big easy chair, she caught Polly by the arm. Swinging the child round she smacked her bottom hard ignoring Polly’s screams and crying.

‘I’m fed up to the back teeth with you lot!’ Minnie said harshly as she threw her daughter away from her. Catching John just as he was about to roll off the chair she went outside and dumped him in an old perambulator in the communal back yard. Securing him in with straps, she left him to cry it out.
Polly sat on the floor in the corner of the room sobbing her little heart out. Try as she might, she couldn’t understand why her mummy was so horrible to them; her brother Adam usually suffering a scolding in the same way. Polly wondered where ten-year-old Adam was; she hadn’t seen him all morning. Probably out scavenging with the big boys – Peter who was eleven and twelve-year-old James. She knew they should be at school, but was fully aware they had no intention of going. 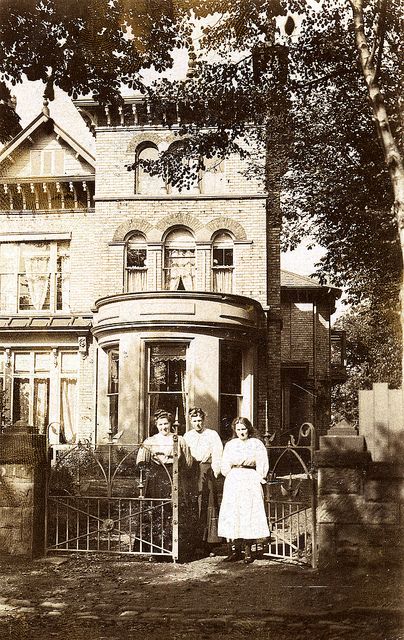 Pushing her lank dark hair off her face, Polly ran her nose along her sleeve once more, her sobs dry now. Her bottom was sore so she lay down on her side before shoving her dirty fingers in her mouth again. Polly’s chocolate brown eyes roamed the room as she lay quietly. Daddy’s chair by the empty fire; a kitchen chair for mummy and a peg rug on the floor. There were no curtains at the windows but no-one could see in anyway because the glass was too dirty. The filthy windows meant the light couldn’t get through either, so there was a small table which held a candle in its holder. 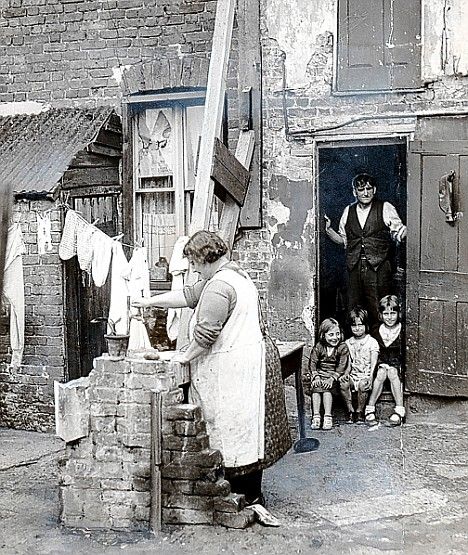 Sleeve and nose coming together yet again, Polly wished Adam would come home. He was the only one who had any time for her. 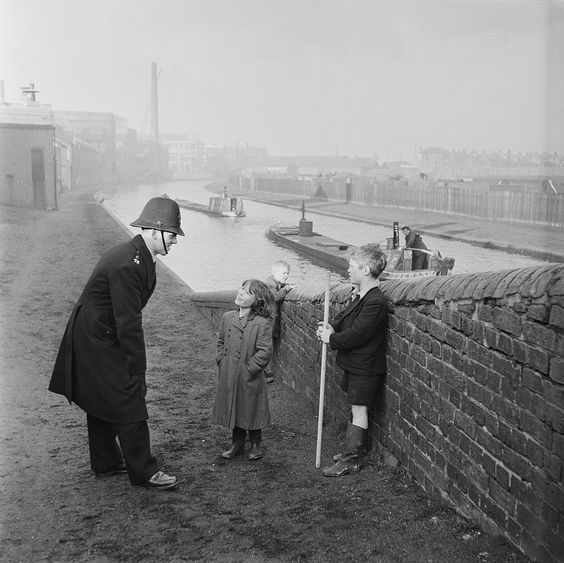 The Five Shilling Children is available at Amazon (Amazon UK), Kobo, iBooks, and Google Play. It is available through the Kindle Unlimited. Thanks to Aria Fiction, I have an ebook copy of The Five Shilling Children to giveaway.  Please leave a comment with your email address (so I can contact you if you win) or (if you prefer) you can email me at Doodlesink@hotmail.com (with your name) with the book title in the subject line by September 29 at 11:59 p.m. EST.  Good Luck!  Thank you for stopping by today and reading my review.  I will be back tomorrow to feature Diamond in the Rough by Jen Turano.  It is the second novel in the American Heiresses series.  May you have a fun day (we all need a little fun in our lives).  Take care and Happy Reading! 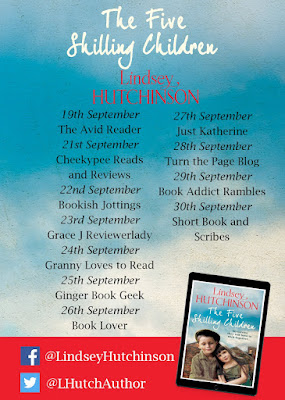