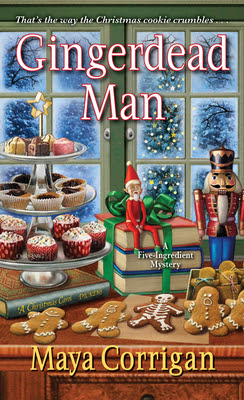 Gingerdead Man by Maya Corrigan has Val Deniston and her grandfather, Don participating in Bayport, Maryland’s Dickens of a Holiday Festival where 19th century London comes alive for a day.  Val’s Granddad is playing the role of Ebenezer Scrooge this year because newcomer, Jake Smith took over the role of Santa.  Jake looks the part of Santa with his dyed white hair and beard along with his rounded figure.  However, his sneezing and coughing along with frequent sips from his flask are unbecoming for the Jolly Old Elf.  At the volunteer tea, the Ghost of Christmas Present delivers gift bags with gingerdead men cookies.  Jake dives into his, collapses, and dies later at the hospital.  Two days later, Oliver Naiman is found in his kitchen after eating chocolates that were left as a gift.  When Val’s friend, Bethany becomes ill, Val rushes her to the hospital.  It turns out that Bethany had received some chocolates as well.  It turns out that they were spiked with poison.  Val and Granddad work together to find the Christmas killer.  They are going to make sure the guilty party spends the holidays behind bars where he will consider himself fortunate if he finds coal in the toe of his stocking. 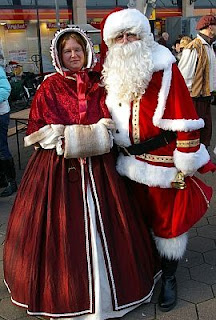 Gingerdead Man by Maya Corrigan is the 7th A Five-Ingredient Mystery.  It can be read as a standalone for those new to the series.  I thought Gingerdead Man was well-written with developed characters.  Val Deniston keeps busy with managing the Cool Down Café, catering events, spending time with Granddad, and dating Bram Muir.  Granddad is always up to something.  When not whipping up five ingredient items for his Codger Cook column, he is working on his detective skills.  Granddad is a hoot.  I liked that he managed to surprise Val with some of the things he did regarding the case.  I enjoyed the descriptions of the Dickens of a Holiday Festival with people dressed up in Victorian costumes.  It reminded me of German Village where I grew up (instead of Dickens, they do German traditions).    The mystery was well-plotted and went nicely with the theme of the book.  I especially enjoyed the Christmas killer dressed up as the Ghost of Christmas Present.  While I was able to pinpoint the identity of the killer early on, I still enjoyed following the mystery to the end.  The whodunit had a good reveal and wrap up.  I like that the case was wrapped up with a bow.  Gingerdead Man was an entertaining and creative cozy mystery with a snockered Santa, a disenchanted Scrooge, killer cookies, contaminated chocolates, and one consumed Christmas killer. Gingerdead Man is available from Amazon* along with other major booksellers (Barnes & Noble, Kobo, Google, Chapter's, Powell's, Waterstone's).  You can find the other six novels in A Five-Ingredient Mystery series here.  Thank you for joining me today and reading my review.  I am off to continue with the cleaning and purging.  I am having a hard time convincing my mother to dispose of items (do we really need the cookie cutters that we have not used in ten years or twenty plastic spoons that were hidden in a drawer in the hallway).  I will return tomorrow with It's That Time of Year by Roisin Meaney.  I hope that you have a cheerful day.  Take care, be kind, and Happy Reading! 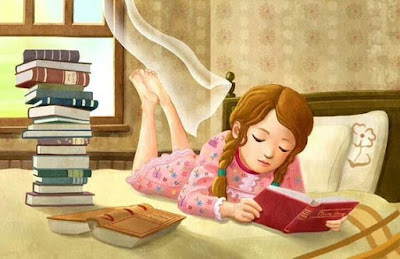