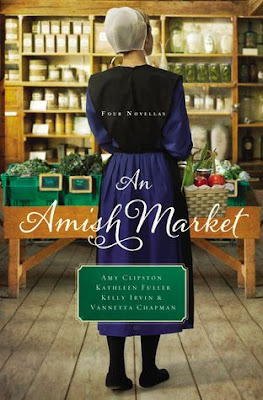 Happy Groundhog Day!  Do you think the little fellow will see his shadow today?  I would not mind six weeks more winter (What can I say!  I like cold weather).  The film Making  a Living premiered on this day in 1914. It was Charlie Chaplin's first film appearance. Other events that happened on February 2 in history are: James Joyce's Ulysses was published in 1922; Auntie's Anne's (the pretzel place) was founded by Anne F. Beiler in Lancaster, Pennsylvania; and Groundhog's Day is first observed in 1887 in Punxsutawney, Pennslvania!

An Amish Market (Amy Clipston, Kelly Irvin, Vannetta Chapman, and Kathleen Fuller) has four sweet, Amish romance stories by four great authors.  Ellie Lapp is still dealing with the loss of her brother, Seth in Love Birds by Amy Clipston.  Ellie’s mother, Margaret and Ellie no longer have Seth’s income to provide groceries and pay the bills.  Ellie gets a part-time job at Bird-in-Hand Gifts and Treasures.  The shop needs more unique Amish-made items to sell.  Ellie believes she has found the right item when she sees Lloyd Blank’s hand carved birds.  They are beautiful with exquisite details.  Lloyd, though, will not sell them because his father believes it is prideful.  Will this hinder the budding romance between Lloyd and Ellie?  This is a sweet story that is well-written and easy to read.  A good story about forgiveness and helping others.

Hannah Lynne Beiler is twenty-two years old and has a stand at the Middlefield Market in Middlefield, Pennsylvania in A Bid for Love by Kathleen Fuller.  Hannah Lynne sells her butter and her mother’s homemade pies.  Ezra Yutzy comes by every week to pick up butter (that he does not need).  Ezra fancies Hannah Lynne but has not worked up the courage to ask her out.  At the annual benefit for the DDC Clinic Ezra notices Hannah Lynne admiring a quilt that was donated by his family (at least Ezra believes he gave them the right quilt).  Hannah Lynne bids on it and, unfortunately, does not win it.  Ezra convinces the buyer to let him purchase it.  Ezra gives the quilt to Hannah Lynne.   This leads to a problem with both Hannah Lynne and Ezra’s mother.  Hannah Lynne wants to pay Ezra back for the quilt (she does not have enough money to repay him).  Ezra’s mother believes he purchased the quilt to return it to the family (only quilt his grandmother ever made).  Now Ezra has a dilemma.  Everything works out through God’s timing!  This is a cute story, but not my favorite.  It was a little awkward (uncomfortable) especially with the lack of communication between Ezra and Hannah (it was frustrating).

Sweeter Than Honey by Kelly Irvin takes place in Bee County, Texas.  Isabella Shrock and her family have just moved to the area from Tennessee.  Isabella wants to fit in and make friends.  This is a new start for her and her family.  But can she find the right friends?  Will Glick works at the Combination Store (owned by Bishop Leroy).  He has burned too many times (by women). Can Isabella help Will?

Love in Store by Vannetta Chapman is set in Nappannee, Indiana and is a mystery.  Stella Schwartz never married because she could not have children.  It has made her bitter.  Stella is a tour guide at Old Amish Mill complex.  David Stolzfus is a widower who just moved to the area to assist his daughter, Rebecca (widow with three kids).  David got a job at the Old Amish Mill.  When pranks (dangerous ones) start happening around the complex, David is asked to investigate.  Stella assists David is finding the culprit before gets seriously hurt.  What else will these two find during the investigation?

All four stories were enjoyable to read.  I especially liked Love in Store (fourth story).  It had good characters and a fun mystery. All four stories are all well-written and have good messages in them.  If you enjoy Amish fiction, then you will like reading An Amish Market.  I give An Amish Market 4 out of 5 stars (I liked the stories).

Each story can be purchased individually if you do not wish to purchase the whole book.  I received a complimentary copy of An Amish Market from NetGally and BookLook Bloggers in exchange for an honest review.

I have to go run some errands today.  I have avoided them as long as I can.  I am currently reading Find Her by Lisa Gardner.  I hope all of you have a good afternoon!  Take care and Happy Reading!

Posted by Kris Anderson, The Avid Reader at 2:20 PM