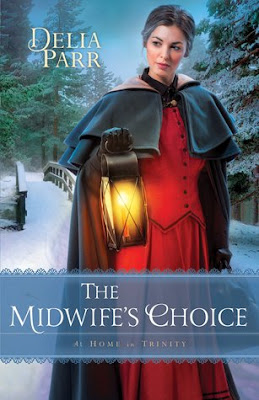 Today is National Battery Day!  What would we do without batteries?  We would not have our cell phones, laptops, kindles, ipods, cordless lawn mower, etc.  So celebrate this wonderful invention today!  The first opera was performed in the United States in 1735.  It was Flora and it was performed in South Carolina (I happen to like opera)!  Mark Twain's Huckleberry Finn was published for the first time in the United States in 1885.  Sonja Henie won her sixth world's women figure skating title in Montreal, Canada in 1932 (have any of you seen her in her movies).  Lucille Ball and Desi Arnez signed a contract in 1953 worth $8,000,000 to continue I Love Lucy until 1955!  And now for a silly historical tidbit.  In 1930 Elm Farm Ollie became the first cow to fly in an airplane!

The Midwife’s Choice by Delia Parr is the second book in the At Home in Trinity series.  Martha Cade (42 and widow) is the midwife to the town of Trinity, Pennsylvania.   Martha is a determined, stubborn woman who is very set in her ways (she reminds me of myself).  She lives in a room over the confectionary (which is great since she has a penchant for sweets) with Fern and Ivy Lynn.  Martha comes home after a difficult birthing case to find her seventeen-year-old daughter, Victoria, has returned home.  Victoria had run away with a traveling theatre troupe several months ago, and Martha had been unable to find her (despite her following the troupe).  However, Victoria does not wish to stay in Trinity.  Victoria wishes to be a writer and has had her first published poem.  Will Victoria be able to convince her mother to let her leave again?

Martha delivered Nancy Clifford’s stillborn son.  This did not cause the baby’s death, Martha reassured the husband, Russell.  The woman claimed she fell walking while carrying wood and landed on her stomach (though she did have a lot of bruises).  Martha had no reason to doubt her story until a few days later.   The townspeople band together to help Nancy and keep her away from her husband (who is a very determined man).  Martha is in for a busy time.  She has to deal with her daughter, Nancy’s situation, Samuel’s condition has worsened, and Thomas Dillon (he is the town mayor and very much in love with Martha) wants an answer to his question.  Read The Midwife’s Choice to catch up on the events in Trinity.

Thank you for stopping by my blog.  I really do appreciate your support.  I am currently enjoying Murder in an Irish Village by Carlene O'Connor.  Tomorrow I will be reviewing Room for Hope by Kim Vogel Sawyer and having a giveaway!  Be sure to stop by and check it out.  Have a delightful day!  Take care and Happy Reading!