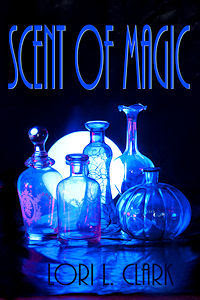 Happy Be Humble Day!  Today is not a day to brag about your accomplishments, your beauty, your gorgeous home, or how many books you own.  We are supposed to practice humbleness on this day (you can go back to bragging at 12:01 a.m.)!  Who remembers Dolly the Sheep? The first cloned animal was announced on this day in 1997!  In 1630 Quadequine introduced popcorn to the colonist (such a delicious treat), in 1819 Spain ceded Florida to the United States, Woolworth opened his first five and ten cent store in Utica, New York in 1879, and in 1860 organized baseball played its first game in San Francisco, California!

Scent of Magic by Lori L. Clark is set in Prosperity, Arkansas.  The Duchesne sisters are starting over again.  Starley, 16, is getting tired of having to move all the time.  The three sisters (Starley-16, Francesca-36, and Juliette-26) have special abilities (which they get when they turn 16) and are known for their magical perfumes.  The three sisters were born ten years apart.   They are going to open The Perfumery in Prosperity (as they do in every town they have lived in).  The town is less than welcoming at first, but slowly start to accept the sisters as they try out their special perfumes.  But then Starley (she can see things about people that others cannot) decides to use a little magic (spell) to attract a boy.  Unfortunately, Beau Byrd (the pastor’s son) has a bad reaction and ends up hospitalized.  Now Pastor Byrd (who is a wolf in sheep’s clothing) wants the sisters out of town.   Pastor Byrd has considerable influence in the town and did not like what the Duchesne sisters perfume did to his wife (she grew a backbone and stood up to him).  Will the sisters have to pack up and move again?  Especially after they have just met the Bouvier brothers (who seem to be special like the Duchesne sisters).   What will the townspeople do (agree with the pastor or support the sisters)?

Scent of Magic is a cute but simple story.  Scent of Magic lacks depth.  The book had a lot of potential, but it was not realized in this book.  I was disappointed with the ending (it was okay).  I give Scent of Magic 3 out of 5 stars (means it was an okay/satisfactory book).  The way the book ends sets up the story for a next novel (with the Bouvier brothers).   Scent of Magic had a lot of teenage stuff (for lack of a better word).  The story is mainly told from Starley’s point of view which leads to comments on cute boys, crushes on boys, and many bad decisions (and let us not forget the angst).

Scent of Magic is available on Kindle Unlimited.  I received a complimentary copy of Scent of Magic from NetGalley in exchange for an honest review.

I hope everyone had a delightful weekend and a magical Monday!  I am currently enjoying No Cats Allowed by Miranda James (it is good).  Do not forget about my giveaway of two copies of Room for Hope by Kim Vogel Sawyer!  Have a good evening, take care, and Happy Reading!