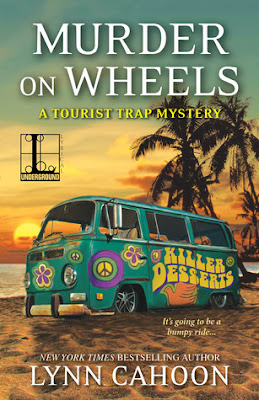 Happy Thank a Mailman (should be mail carrier) Day!  We have such a great mail carrier in our area (his name is Bill).  He does a wonderful job.  I really feel bad for him on rainy days like today (it has been pouring all afternoon).   Make sure to thank your mail carrier for all his or her hard work! On February 4 in 1938 the Walt Disney's first full length animated feature was released!  It was Snow White and the Seven Dwarfs. This is actually the first movie I saw in a movie theater (when it was re-released!  I am not that old!).   George Washington was elected our first president in 1789, the USO (United Service Organization) was created in 1941 to entertain American troops and in 2004 Facebook was born (created by Mark Zuckerberg).

Murder on Wheels by Lynn Cahoon is the sixth book in the A Tourist Trap Mystery series.  Jill Gardner is the owner of CBM (Coffee, Books, and More) in South Cove, California.  Jill and her boyfriend, Greg King are on their monthly double date with Amy Newman (friend and city planner) and her boyfriend, Justin Cross (history professor).  They decided to go to a geocaching event.  Their they meet Kacey Austin, president of Coastal Geocache Club.  She is also the wife of Dustin Austin, owner of Austin’s Bike Shop (he is also the awful man who dumped Jill’s friend, Sadie Michaels).

Then Jill finds out that Kacey using the food truck (that Jill wanted to buy) and opening Good For You Desserts (gluten-free desserts).  Kacey has a severe wheat allergy (she has Celiac’s disease). This will certainly not help business at Jill’s coffee shop (especially since they do not offer gluten-free alternatives).  Then a body in found on the beach.  Kacey Austin is dead.  Who would have wanted to kill this sweet young woman?  Greg tells Jill to stay out of it, but you know Jill cannot help herself.  She just has to investigate.  Will Jill be able to find out who killed Kacey (and keep Greg from finding out that she is at it again)?

Murder on Wheels was a disappointment.  It was more like a soap opera than a cozy mystery novel.  There seemed to be a lot of focus on the love lives and friendships of the characters (examples are:  Aunt Jackie dating Harrold Snider from Train Station which put Josh Thomas’ nose out of joint; Toby and Elisa breaking up; Sasha has a crush on Toby; Amy is mad at Jill because she would not report on her neighbor’s water usage; Sadie upset about Austin breaking up with her).  We also got a lot of information about food (they seemed to constantly be eating).  I wanted more mystery (a few clues).  The mystery was extremely simple to solve (it was just so obvious), but readers like to follow the clues to the conclusion (arrest of the killer).  Murder on Wheels cannot be read as a stand-alone book (I have read all the books in the series).  You really do need to read the other books in the series in order to understand everything that is happening in Murder on Wheels (the relationships, characters, etc.).   I give Murder on Wheels 3 out of 5 stars.  I just felt the book was too superficial.  I like reading mysteries for the mystery.  The mystery seemed to take a back seat in Murder on Wheels to romance and food.

The other books in A Tourist Trap Mystery series are:  Guidebook to Murder, Mission to Murder,  If the Shoe Kills, Dressed to Kill and Killer Run.  I received a complimentary copy of Murder on Wheels from NetGalley in exchange for an honest review.

I am off to make dinner (I am running very late today).  I am currently reading The Witches of Cambridge by Menna Van Praag (I am really enjoying it)!  I hope you have a bewitching evening!  Take care, stay dry (if possible), and Happy Reading!

Posted by Kris Anderson, The Avid Reader at 7:18 PM