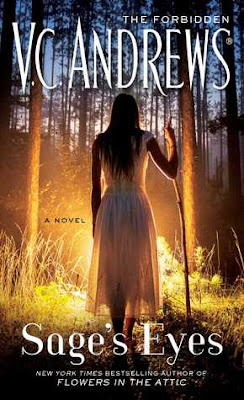 It is National Weatherman's Day!  A day to celebrate those people who try to predict (use science) the weather. Overnight the rain and wind brought cold weather into our area (I love it).  On February 5 in 1919 United Artists was created by Charlie Chaplin, Mary Pickford, Douglas Fairbanks, and D.W. Griffith (director).  Bakelite, the first synthetic (man-made) plastic, was announced by the creator Leo Baekeland in 1909. Bakelite was used to make many items like jewelry, phones, buttons, and for radio, light bulb, and automobile parts.  In 1953 Britain's sweets rationing (instituted at the beginning of World War II) is discontinued. They could now buy as much candy as they wanted (sugar was in such a short supply during the war)!  The final historical fact for today is astronauts Alan Shepard and Edgar Mitchell land on the moon in 1971 during the Apollo 14 mission.

Sage’s Eyes by V.C. Andrews is set in Dorey, Massachusetts.  Sage Healy has heard voices since she was child (she finds them comforting).  Her adoptive parents (cold and clinical people) told her to ignore them.  Sage also seems to know things about people and situations (and liked to blurt them out as a child).  Her parents keep an eagle eye her like she is a bomb that will go off at any moment (or like she is a scientific experiment and they are taking notes).  There is a new student at school named Summer Dante.  He is intriguing and Sage is drawn to him.  He seems to understand Sage’s gifts and he has a few of his own.  He encourages her to use her gifts.  However, his ideas of right and wrong are a little different than Sage’s.  Sage is extremely tired of her parent’s secrets and wants to find out what they are hiding.  Will Sage like the answers when she gets them?  Will Sage use her gifts for good or will she be drawn to the dark side?

I was so excited when I received the opportunity to read Sage’s Eyes (my daughter loves V.C. Andrews books), and I was looking forward to reading a good paranormal novel.  I was extremely let down by Sage’s Eyes.  There is very little paranormal action in the book.  It is a very blah (boring, dull) book.  The book is confusing (things are not really explained until the very end of the book) and it is so hard to get into it (I never did).  Most of the book is devoted to Sage’s thinking (especially about how cute Summer is).  Her internal dialogue took up the majority of the book (and it was monotonous).  I give Sage’s Eyes 2 out of 5 stars (I did not like it).  The book had so much potential but none of it was realized.  We are also left with a very unsatisfying ending (like there will be another book to pick up where this one left off).

You can follow V.C. Andrews on Goodreads to get updates on her latest releases.  I received a complimentary copy of Sage’s Eyes from NetGalley in exchange for an honest review.

I hope everyone is staying warm.  It is a good day to snuggle up with a good book.  The book I am currently reading is Second House from the Corner by Sadeqa Johnson (I am not enjoying it). Have a good Friday, take care and Happy Reading!

Posted by Kris Anderson, The Avid Reader at 2:25 PM