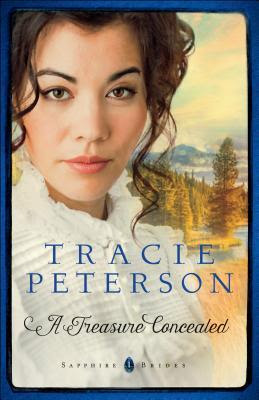 Did everyone remember to spring their clocks ahead?  I am glad that the majority of the clock items in my household change automatically.  Did you know that two states do not change their clocks?  They are Arizona (except the Navajo Nation) and Hawaii. The U.S. Virgin Islands, Puerto Rico, Guam, America Samoa, and the Northern Mariana Islands also do not follow Daylight Savings Time.  On March 13 in history. . . Harvard College is named after clergyman John Harvard in 1639, Pope Francis is elected as the 266th Pope of the Catholic Church in 2013, and Apollo 9 returns safely to Earth after testing the Lunar Module in 1969.

A Treasure Concealed by Tracie Peterson is a historical, Christian romance novel and the first book in the Sapphire Brides series.  It is 1895 in Yogo City, Montana.  Emily Carver’s mother, Nyola is ill.  Emily is doing her best to take care of her, her father (Henry), and their home.  Emily just wants a permanent home.  She wants to be settled in one place.  Her father has kept their family moving her whole life (gold fever and wanderlust) and Emily has no desire to move again.  Emily hides her figure under bulky, manly clothes (it would not due to look to feminine in this area).  So far Henry has not uncovered any gold on his claim (the area has been played out, but he does not believe it).  They only thing he keeps bringing up are pretty blue pebbles.

One day Caeden Thibault comes to town.  Caeden is a geologist with the government (and running away from his own past and pain).  Henry meets Caeden in town and invites him to camp out on their property (Henry is very friendly and generous).  Emily is shocked when Caeden comes into their home while she is getting out of the bath.  This is the beginning of a tumultuous romance.  Can these make it work?  What happens when Emily shows Caeden the blue pebbles?  You will need to read ATreasure Concealed to find out.

A Treasure Concealed is an entertaining Christian, romance novel.  ATreasure Concealed is well-written.  Tracie Peterson did a wonderful job in describing gold mining life in Montana.  I could picture the town, the people, the Carver’s home, and the difficulties these people faced.  It has the normal romance elements, but it had something special.  The novel focuses on people regaining their faith, that we have a loving God, and leaving a problem in God’s hands (instead of worrying and fretting over an issue).  A Treasure Concealed has a lovely ending.  I give A Treasure Concealed 4 out of 5 stars (which means I liked it).  I will definitely be reading the next book in the Sapphire Brides series.

The next book in the Sapphire Brides series is A Beauty Refined. It will be out in June 2016.  I received a complimentary copy of A Treasure Concealed from NetGalley in exchange for an honest evaluation of the book.

I hope everyone has had a great weekend.  My back is finally starting to feel better (as long as I do not overdue).  I am off to watch the final episode of Downton Abbey again (they are replaying it).  Once Upon a Time and CSI:  Cyber are also on tonight.  I just finished reading Karma's a Killer by Tracy Weber (it was not my type of book).  Now I have two books with the same title to read (Hold Still).  I thought I had listed the same book twice. After some research, I discovered that they are two different books (I am glad I checked).  Have an enjoyable evening, take care, and Happy Reading!

Posted by Kris Anderson, The Avid Reader at 6:59 PM