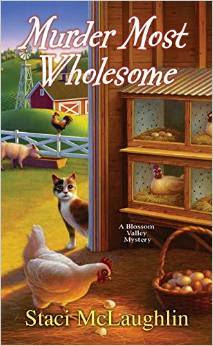 What a beautiful spring Monday!  It was nice and cool overnight and the day is just lovely!  We have not had a decent in spring for many, many years (and I am loving it as you can tell).  It is National Crown Roast of Pork Day (really)!  It is not a "national" holiday as it was never proclaimed by government officials, but someone decided to create this odd day. You do not have to have a crown pork roast today (of course), just have some type of pork (to honor the day).  I am cooking bratwurst on the grill (I grew up in German Village in Columbus, Ohio).  Alexander Graham Bell patented the telephone on March 7 in 1876.  The telephone provided instantaneous communication for the first time.  Do you remember the song "We are the World".  It was released internationally on this day in 1985 (I have to admit that I am not a fan, but the song really sticks in your head).

Murder Most Wholesome by Staci McLaughlin is the fifth book in A Blossom Valley Mystery series.  Dana Lewis works at O'Connell Organic Farm and Spa handling their marketing (and social media).  However, when the chef, Zennia, is unable to work due to a long lost love being murdered and left in her front yard, Dana has to take over (her idea of cooking is hamburger helper).  Dana figures the best way to get Zennia (the cook) back to work is to solve the murder.  Will Dana be able to figure out who killed Birch?  Will the guests at O'Connell Organic Farm and Spa get edible (and healthy) meals (besides peanut butter and jelly)?  You will need to read Murder Most Wholesome to find out.  Murder Most Wholesome is easy to read and enjoyable.  The murder mystery was extremely easy to solve (the killer was so obvious), but the writer provided great clues (and some misdirection).  This is one of the better cozy mysteries I have read recently (another great one is Devonshire Scream).  I give Murder Most Wholesome 4 out of 5 stars.  It has a sweet and romantic ending that you will not want to miss.  Murder Most Wholesome can be read alone.  You will not be lost if you have not read the other books in the series.

Have a magnificent Monday!  I am currently enjoying The Forbidden Orchid by Sharon Biggs Waller (wait until you find out why it is forbidden). Take care and Happy Reading!