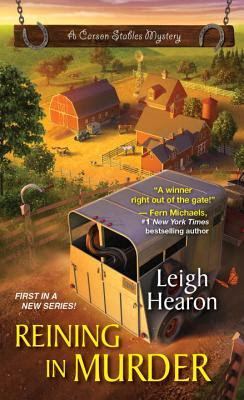 It is the last day of March!  The month just flew by so quickly.   It is Bunsen Burner Day.  This day celebrates the birth of German chemist Robert Wilhelm Eberhard von Bunsen (born on March 31, 1811) who created the Bunsen Burner.  I have some interesting historical facts for you today!  In 1889 the Eiffel Tower officially opens!  In 1917 the United States buys the Danish West Indies and renames them the Virgin Islands, construction of the RMS Titanic begins in 1909, and Daylight Savings Time goes into effect for the first time in the United States in 1918.

Reining in Murder by Leigh Hearon is the first book in A Carson Stables Mystery series.  Annie Carson is a horse rescuer in Suwana County, Washington.  She receives a call during the night from Sheriff Dan Stetson.  A man was in an accident, and he was hauling a horse.  The horse needs to be brought back to Carson Farm.  The man who was driving, Wayne Johnston, did not survive.   The horse was okay and only suffered minor injuries.  Unfortunately, the gorgeous horse belongs to Hilda Colbert of Colbert Farm.  Hilda has a nasty personality.  Hilda contacts Annie after she has been up all night caring for her horse, demanding that the horse be transported to her farm immediately (indicating that her farm is far superior).  When Annie insists that the horse cannot be moved yet, Hilda states that they will pick up the horse first thing the next day.  The next day no one shows or calls.  When Annie goes over to Colbert Farm (the next day), she finds Hilda dead in her bedroom.  The suspect list is long (since Hilda did not have a winning personality).  Sheriff Stetson’s number one suspect is Marcus Carson, Hilda’s husband (feel sorry for him—being married to Hilda).  Annie is not so sure.  Annie starts investigating (while keeping Dan filled in—sort of) and then Marcus disappears.  Annie is sure that foul play is involved, but Dan feels that Marcus took off.  Then one of the Colbert Farm ranch hands is missing.  People are dropping like flies.  What is going on?  Not only is Annie investigating Hilda’s murder, but her half-sister Lavender has decided to visit (they have never met).  Lavender is a quirky individual who believes that she has psychic powers (Lavender was spoiled by her parents).  Life is never dull at the Carson Farm.

Reining in Murder is an easy to read cozy mystery novel.  I just wish more of the book had been devoted to the mystery.  The clues are very sparse (more show up just before the killer is revealed).   More time is devoted to Lavender and her antics than to the mystery.  We also get quite a bit of information about horses, mules, dogs, Annie’s eating habits, Sheriff Stetson’s marriage troubles, and the type of scotch Annie (and Dan Stetson) like to drink.  I give Reining in Murder 3 out of 5 stars.  I wish the mystery had been harder to figure out.  You would think there would be a lot of suspects (since Hilda was not liked by anyone but her husband), but, in reality, there are few of them provided in the book.  As soon as Annie found the body, I knew who killed her (you know who is going to be killed as soon as she is mentioned in the book).  I did like the main characters and the gorgeous setting.  I will read the next book in the series (hopefully, there will be improvement).

The next book in A Carson Stables Mystery series is Saddle Up for Murder which will be out on October 25, 2016 (it is available to pre-order).  I received a complimentary copy of Reining in Murder from NetGalley (and the publisher) in exchange for an honest evaluation of the novel.

My current novel is Curtains for Miss Plym by Kathleen Delaney (I think Amazon has the price incorrect at $22.36 for Kindle).   I am off to do chores and run to the post office.  I hope everyone has a lovely day! Make sure to make time for yourself today.  Take care and Happy Reading!