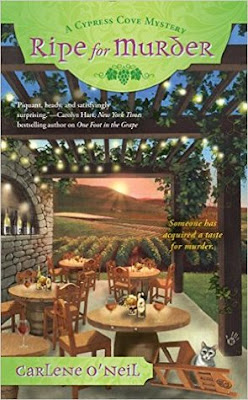 Happy Monday!  It is Fragrance Day!  This is not a day for people with allergies to fragrances (like me).  I have driven my parents and daughter crazy over the years because of this allergy (especially my daughter who likes perfume).  Ready for some facts (I am going to give them to you anyway).  In 1952 was the first rock and roll concert!  DJ Alan Freed's Moondog Coronation Ball (I did not make this up) was held in Cleveland, Ohio.  The police were forced to break it up after an hour (party poopers).  Alcatraz Prison closed on March 21 in 1963.  It went from one of the most feared places to a big tourist attraction (said to be a haven for many ghosts).   President Carter announced that the United States would boycott the 1980 Olympic games that were being held in Moscow (because they invaded Afghanistan--anyone see the irony in this).  Dallas airs "A House Divided" episode leading to eight months of speculation on Who killed J.R.?  How many of you remember this?

Ripe for Murder by Carlene O’Neil is the second book in A Cypress Cover Mystery series.  Penelope “Penny” Lively owns Joyeaux Winery in Cypress Cove, California which she inherited from her aunt.   Penny and her neighbor (and friend), Antonia Martinelli have been invited to St. Katrina Silverado Mission Inn and Spa by a train line company.  The company wants to set up a rail line through the area and it will stop at the local wineries (which will mean more visitors and sales for the wineries).  Penny and Antonia will be contributing land instead of money (for the rail line).  Connor Lavigne, Penny’s manager, will be attending with Penny.  Penny is attracted to Connor but has yet to act on it.  Maybe they will have a chance to get closer on this trip.  Unfortunately, Chantal Martinelli is attending with her mother.  Chantal and Penny do not get along.  Chantal is a big flirt as well as annoying.  One of the potential investors is Dave Dupont of Dupont Automotive who has brought his new wife, Tara (she is a piece of work).  The group then boards a train to experience the companies train tours.  They are at the Berninni Winery when Chantal and Tara have a fight (cat fight).  Penny actually comes to Chantal’s defense (shocking).  The group departs back to the train.  Soon the train comes to a sudden halt.  Someone pulled the emergency brake cord.  Tara Dupont is dead on the tracks and Chantal is the main suspect (found unconscious in the last car).  Penny might not be fond of Chantal, but she does like her mother (who wants her daughter cleared).  So Penny starts sleuthing to find Tara’s real killer.

Ripe for Murder was too much like a romance novel.  I read mystery novels for the mystery (shocking I know).  There was too much fixation on Connor by Penny (feeling that Chantal was paying him too much attention, Connor spending time with Chantal, admiring his physique, etc.).  Penny and Connor are not even dating.  I hate to see what Penny would be like if these two were a couple.   One thing that did not make sense was Penny’s blood phobia.  She faints at the sight of blood (happened more than once).  Not a good trait for a sleuth.  I think it is supposed to be a quirky trait, but it came across as ridiculous (I think it was just an excuse for her to be caught and carried by Connor).   The author did provide good clues and does a credible attempt at misdirection.  I did find that the killer was obvious, and I knew who had done the deed as soon as the murder scene was described.  Ripe for Murder is the second book in the series, but it can easily be read as a stand-alone book (information from the first book is included).  I give Ripe for Murder 3 out of 5 stars.   I will read the next book in the series to give it another chance (to see if the writer has improved).

The first book in A Cypress Cove Mystery series is One Foot in the Grape.  You can follow Carlene O'Neil on Amazon to get updates on her latest books.  I received a complimentary copy of Ripe for Murder from NetGalley (and the publisher) in exchange for an honest review.

I hope all of you had a delightful and relaxing weekend.  I am currently reading Death of a Bacon Heiress by Lee Hollis (it is a little ridiculous).  Take care and Happy Reading!